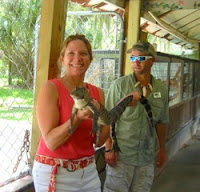 Like any new mother, I've spent some time wondering what Alice the Alligator will be like when she grows up. (If you haven't read my prior post, you are probably thinking (i) that I have gone totally insane and/or (ii) that a lot has happened to me since you last checked in.  While that might be true, this post will make a bit more sense if you've read my prior post, "Are You My Mother???")

Luckily, I was able to view alligators at all ages of life at Gatorama, and I was even able to hold this three year old.  (You can't see this but its mouth is taped shut with duct tape.  I think they call child services if you actually do that to your child.)   This wasn't part of the program when Dorrit visited last year, and she declined the opportunity to expand on her gator experience.  I will admit that I was somewhat nervous about holding this guy, but I figured in for a penny, in for a pound. And I had to think that if this was dangerous in any way, it wouldn't be part of the program.  It's not as if they were offering you the opportunity to feed the full-grown gators and crocs.  Now THAT would have been scary!   Did I mention that Gatorama's slogan is "Fast Hand or No Hands"??? 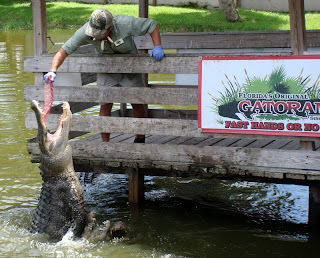 We learned during out visit that there are a couple of easy ways to visually distinguish an alligator from a crocodile.  First, crocodiles have narrow snouts while the snouts on alligators are rounded.  Second, when an alligator's mouth is closed, you can only see its top teeth.  Crocs are a bit more ferocious looking, with both their top and their bottom teeth visible at all times.  We also found out that crocs have a gland that enables them to filter salt water; alligators can tolerate salt water, but they are more likely to be found in fresh water habitats.   And if you're wondering how gators/crocs can work up the propulsion to jump this far out of the water, it's a combination of the power of their tails and the power they get from the sun. 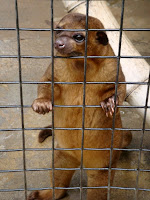 While gators and crocs are the main attraction at Gatorama, we did have the chance to view some other wildlife.   They have a panther and some raccoons and some parrots and some peacocks.  We fell in love with the incredibly adorable kinkajous (also known as honey bears).   Kinkajous are often mistaken for ferrets or monkeys, but are unrelated to either of these animals.  Kinkajous are naturally nocturnal animals, which is one reason you might not have seen one before.  Gatorama has trained them to be awake during daylight hours (and I suspect the M&Ms, raisins and other treats that the visitors give them is a pretty good incentive to give up their nocturnal habits).  They are really sweet and playful and use their tail as a fifth limb when climbing (hence the resemblance to monkeys).

Now that I've had a bit of distance from my Gatorama experience, I realize that there are tons of questions that I failed to ask.  What happens to all those adorable little gators when they've grown up?  (I actually know from the website that that this is a "working" farm, and the gators are harvested for their skins and their meat.  There are gator recipes online if you're feeling adventurous, and you can buy gator meat in the Gatorama gift shop.  I'd like to talk to them about the business, though.)   How do they determine the gender of the gator once they've grown up?   Can they distinguish one gator from another?  Where do the other animals come from that round out the Gatorama experience?   I'm not too worried about not asking these questions on this visit, though, since I know that I will be returning to Gatorama next year for another hatching.   That was one experience that deserves to be relived.

If you're interested in exploring Gatorama, go to http://www.gatorama.com/default.asp.  It's a quick hour's drive from Punta Gorda.   This year's hatching festival ends on August 27th, but there's always next year.  Maybe I'll see you there!