The crescent moon was hanging high in the sky as I made my way into the Event Center last Tuesday to work my first election.  Even though it was still an hour until sunrise, the polling center was buzzing with activity and excitement.  You could immediately differentiate the experienced workers from the newbies.  The experienced hands were checking the machines to make sure everything was powered up and working properly while the newbies just tried to stay out of the way and get the lay of the land.

My designated job was to distribute ballots, and I randomly picked the table for Precinct 4 and put my things down.  (The Event Center is the voting location for Precincts 3, 4, 19, and 28.   I am not sure which precinct the Event Center itself is in, but the other precincts are contiguous, which is a requirement in order for their residents to vote at that location.)    Lindsey was my tablemate, and I feel like I lucked out to end up with someone so interesting to spend the long day with. 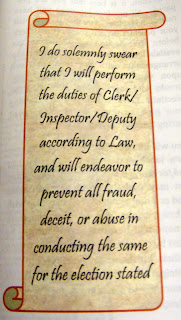 A few minutes before 7:00, we all raised our right hands and the Oath of Office was administered.   At 7:00 on the dot, it was announced that the polling place was officially open for business.  As a ballot distributor, my job was simple.  When a voter approached our table, we would determine if he needed a Republican, Democratic, or No Party Affiliation ballot.  Once we identified the correct ballot,  one of us would tear the numbered ballot stub off the bottom of the ballot and staple it to the voter pass while the other would give the voter the ballot in a manila folder masquerading as a privacy sleeve and directions on the voting process.  (If ballot distribution were an Olympic event, Lindsey and I surely would have qualified for a gold medal for the speed and efficiency of our process.)

As the day progressed, it became evident that Precinct 28 was the largest (and perhaps most civic minded) of the precincts whose residents were voting at our location.  We had been instructed to turn in our ballot stubs/voter passes once a bundle of 25 had accumulated to make the reconciliation process easier at the end of the day.  The workers covering Precinct 28 casually walked over time and time again during the day to the turn in their bundles as the rest of us watched with envy.  A bit of an informal competition developed among the three other precincts to be the first to generate a bundle.  As voters were checked in, we could hear the workers registering the voters instruct them as to which table they should proceed to.  When Precinct 4 was indicated, we would cheer and eagerly welcome them to our table.  I know this sounds strange and perhaps a bit inappropriate given the seriousness of exercising your right to vote, but there was really good energy in the room, and people seemed to enjoy being greeted in a spirited fashion.  (Sadly, poll worker enthusiasm doesn't translate into high voter turn out.  We were the last table to turn in a bundle and actually had only 38 voters from our precinct all day.)

Lindsey and I also worked on our Vanna White imitations throughout the day.  The way the room was set up, people saw our table first when they crossed the threshold and instinctively headed our way, bypassing the registration desk to their right.  When we saw a voter making this mistake, we would direct them to the check-in spot with a smooth wave of our arms.  (You have to amuse yourself somehow when you're there for 12+ hours!)

As the clock ticked towards 7:00, I watched with as much anticipation as if I were waiting for midnight on New Year's Eve.  Voter turn-out had stalled as a weather pattern made its way through around 6:30.  I had made my way through all my Diet Cokes and other provisions for the day (which I had brought in a roller cooler--I felt a bit like I was going on a camping trip when I headed out that morning).  And frankly I was ready to get home and relax.  When it was announced that the polls were officially closed, the workers all cheered and clapped.

All kidding aside, working at the polls was a very positive and educational experience.  Some small issues did arise during the course of the day--such as voters whose addresses had changed, couples conferring during the voting process, and one voter who didn't have a photo ID--but the clerk handled these situations calmly and professionally.  At the end of the day, after breaking down the equipment and working with the clerk on her reconciliation process, we made our way out into the night.   I realized on my way home that working the election had given me a sense of pride and a feeling of ownership of our democratic system that I'd never felt before.   My father was the Assistant Supervisor of Elections in Bay County for many years, and I also now have a better understanding of what his job was all about and how good he must have felt at the end of a successful election cycle.   I'm looking forward to working again in November, when I expect the voter turn-out to be a wee bit higher.  Make sure that you get out there and vote!
at August 18, 2012