I do not consider myself an envious person, but around this time last year, Dorrit sent me an email with a picture of her holding a little baby alligator and a note that said something like, "This was so much fun.  Sorry you missed it!"   I was so jealous.  And so I marked my calendar back in January to make sure I didn't miss Gatorama's Hatching Festival this year.   It was definitely one of the coolest things I've ever done.

We saw lots of interesting things at  Gatorama, but I'll cut to the chase in this post and tell you about the hatching experience.  Allen Register (who owns Gatorama with his wife Patty) told the group a bit about the events leading up to our big day as hatchers.  Back in April, Allen went out to survey the gators and heard a bunch of growling coming from the big boys.  This was a sure sign that love was in the air.  Sure enough, come June, there were a lot of nests hidden on the banks of the property with eggs to be collected.  Allen and son Ben would head out to the high grass with a gator stick, a nesting tray, and a sharpie.  When they found a nest, one person would fend off the mama gator by nudging the stick into her snout while the other person would mark the eggs with the sharpie.  The marking is a crucial step in the process because the baby gator is attached to the top of the egg, and if its membrane is torn away in the move to the incubator, you lose the baby.  Once all the eggs have been marked, they are carefully moved to the nesting tray and taken back to the incubator, where they live for approximately 65 days in an environment that is temperature and humidity controlled (at 90 degrees and 100% humidity!)  Allen and his team collected 3232 eggs this year and, as he said, "That's a lot of mamas to fight off!"   With that backdrop, Allen did a demonstration hatching, showing us a couple of "money shots" not to be missed.  Then we were up!

I gently shoved an eight year old visiting from the UK out of the way so that I could be the first hatcher.  (I have been waiting a whole year for this experience after all; he probably just found out about it a week ago.)  After I had donned my gloves, Ben put an egg in my hand. As I held the egg, I could feel the baby moving inside.  It was a very strange sensation.  Ben told me that the movement was caused by the baby chirping for its mother.  A few seconds later, the little rascal stuck his/her head out of the shell.  (The gender of an alligator is not determined until it is about two years old.  Don't ask me.  I'm just reporting.)   Ben asked me if I wanted to name the baby and, unable to immediately come up with a gender-neutral name, I went for alliteration--"my" baby would be called Alice the Alligator.

Vicki was up next, and I watched her go through the process as I was oohing and aahing over little Alice.  In order to not let the baby get away from you, you have to hold the gator around the scruff of its neck with your thumb and forefinger.  (I feel quite certain that I almost strangled Alice to death in the first minute of her life in the outside world between my excitement and--to be honest--the tiniest bit of fear.)    Vicki was much calmer than I was, but then again she has been through actual childbirth so this was not as big a deal as it was for me.  Vicki named her little guy Eli after her new grandson. 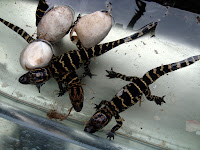 Baby gators don't have much of a learning curve.  They come out of their shells ready to hit the water and go.  So once we were ready to give our little ones up, we put them with the others in a little swimming tub.  (In case you're wondering, their eggs/umbilical cords stay attached to them for a couple of hours.)   They quickly settled into their new environment, and I'm embarrassed to say that I was not able to tell Alice from the other babies notwithstanding that their markings all differ slightly.  My job done, I proudly collected my certificate designating me an honorary hornback (a type of gator) and headed to the cafe for a bite of lunch.  I had a hot dog instead of the gator gumbo; the gumbo just seemed a little bit too close to home after the birthing experience.