News flash:  The Charlotte Symphony Orchestra is alive and well after Toshimasa Francis Wada's departure as conductor.   I have to admit to a bit of apprehension about the CSO's Fourth of July concert since I have only seen the CSO perform under the baton of Maestro Wada.  In my mind, Francis and the CSO are inextricably linked.  Once the Orchestra started playing, though, any concerns I had quickly fell away.  It was a vibrant and exciting night of music, with Scott Lavender as guest conductor and Michele Amato as guest vocalist.

The music was so much fun--and so varied--that it's hard to say which piece I enjoyed the most.  American Salute was composed by Morton Gould during World War II and is an homage of sorts to the well-known Civil War song When Johnny Comes Marching Home.  Lavender encouraged the audience to count how many times we heard the tune.  (I was enjoying the music so much that I lost track after the fifth iteration.)  From there it was on to some jazzy numbers featuring Michelle Amato on vocals.  Who knew that the CSO can swing????   The musicians were smoking during George Gershwin's S'Wonderful, and special kudos go out to David Edwards on the sax and Mic Smith on the trumpet.  Amato is no slouch either, and she segued from Gershwin to a medley of Judy Garland songs (including "Over the Rainbow") with ease.   The first half of the concert closed with Symphonic Portrait, a medley of Irving Berlin songs such as "There's No Business Like Show Business," "Alexander's Ragtime Band," and "White Christmas" (which seemed particularly fitting on a hot July night!) 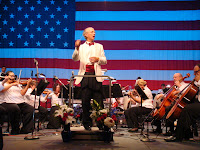 Whether you recognize the title or not, I'm sure you've heard Aaron Copland's Hoe-down from Rodeo which was included in the second half of the concert.  It's the song that's featured in the "Beef.  It's what's for dinner" ads, and it was an inspired selection for a concert on a holiday known for its barbecues.  When Amato rejoined the CSO after the piece, she commented, "I'm in the mood for some steak."  (Leo Burnett should be proud.)   Amato then showed that she's not just about jazz by singing Summertime (from Porgy and Bess) and Somewhere (from West Side Story).  She did a great job, and I give her enormous credit for taking on Ella and Barbra Streisand in addition to Judy Garland.   A portion of the 1812 Overture  (sans an actual cannon) was of course in the program, and it was as exciting as always.  The evening ended with a rousing rendition of God Bless America led by the Veteran's Chorus.

I'd be remiss if I didn't mention how terrific Scott Lavender was as guest conductor.   Lavender has an eclectic resume, but he currently works as Johnny Mathis' conductor and pianist.  Mathis performed in Fort Myers earlier this year and CSO principal trombonist George Mancini was part of Mathis' band for the show.  Mancini  identified Lavender as a potential guest conductor for the CSO, and his instincts were spot on.  Lavender immediately developed an easy rapport with the audience.  He shared tidbits of information about the composers and works that added to my enjoyment of the music.  (Katherine Caldwell gives a similar talk before each of the classical concerts, and I always find it enormously helpful.)  Did you know that John Philip Sousa, master of the marches, aspired to be an operatic composer?  Or that the 1812 Overture, which has become synonymous with Fourth of July concerts thanks to Arthur Fiedler and the Boston Pops, has nothing at all to do with the United States?  Tchaikovsky's inspiration for the composition was the French invasion of Russia.  At the beginning of the overture, Lavender conspiratorially turned to the audience and said, "The French are coming."  As the music got louder, he told us, "They're getting closer!"  It was a nice touch.

At the end of the concert, I felt like I'd spent an evening with old friends.  I can't wait for the classical season to get underway in November.  Over the course of the season, we'll hear Gypsy Baron Overture by Strauss and Suite from the Firebird by Stravinsky and Symphony No. 5, Op. 64 by Tchaikovsky.   The baton will be flourished by a different conductor at each concert, each of whom hopes to be selected as the new maestro of the CSO.    It promises to be an exciting season.