Having Tea with Lee (Child, that is)

I'll admit it--I have a thing for author Lee Child.  Or maybe I have a thing for his protagonist, Jack Reacher, and it manifests itself through my infatuation with Lee.  Either way, getting to see Lee up close and personal not once but twice at the Book Expo was a highlight for me. 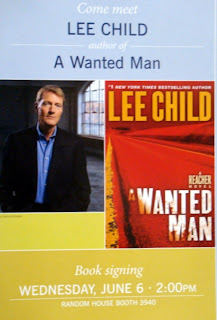 It goes without saying that I was near the front of the line at the Random House booth to pick up a signed copy of Lee's newest book, A Wanted Man.   Lee was a ticketed author at the Book Expo one year when I was still living in New Jersey, and I left my house around 5:45 a.m. to make sure that I got into the City in plenty of time to be there when tickets were given out at 7:00.  So standing on line with other Reacher fans for 45 minutes was not exactly a hardship, and I have a signed copy of the book in my hot little hands.  The dilemma, of course, is when to read it.  There's a temptation to devour it right away, but then I'll have to wait another year for my next fix (although I do find that re-reading the books is quite enjoyable.)  So I'm waiting until I need a little pick-me-up.  But I digress....

Each year the Expo hosts author breakfasts and lunches each day at which three or four authors talk about their work.  I have never been to one of these events, both because I am really cheap (you have to pay an additional fee to attend) and because they interfere with the business of the day of collecting all of those galleys!   This year, though, I couldn't resist going to the author's tea where Lee was one of the panelists.  (Debbie Macomber and Daniel Handler--aka Lemon Snickety--were also on the dais.)  In fact, it was a perfect way to end the day.  It was at 4:00 when things are winding down and you're more than ready to get off your feet.   I found a seat with a prime view and settled in. 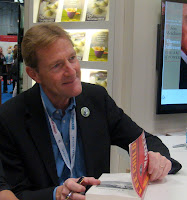 Technically, the topic of the discussion was supposed to be audio books, but Lee didn't have much to say about that aspect of the publishing world. Dick Hill narrates all of his books.  (I just listened to Running Blind and he does a fine job.)  So he regaled the audience instead with stories about the first place Reacher madness took hold--Bulgaria.   Child's popularity in Bulgaria is largely attributable to Slavi Trifonov, a late night talk show host in the mold of Leno or Letterman.  Slavi is one of Lee's biggest fans and talks about Child/Reacher every night on his show.  For years, he made a major push to get Lee to do a Bulgarian book tour.  There were a few reasons this wasn't overly appealing at first blush, including the language barrier, the fact that the population of Bulgaria is smaller than that of New York City, and the fact that Lee's books generally come out in October and, as a big NY Yankees fan, he doesn't like to be out of the country during the World Series.  Slavi sounds like quite the persistent guy, though, and Lee relented and agreed to do a tour one year when the Yankees' hopes for a championship weren't looking promising.

Lee's tales of his time in Bulgaria were quite humorous.  When Lee deplaned onto the tarmac in Sofia, 50 or more journalists surrounded him yelling out questions in Bulgarian.  He was whisked away to a waiting limo, which drove him about 20 yards to the terminal, where he entered the VIP lounge.   Journalists galore were waiting for him there as well, along with his publisher and Slavi's people carrying massive bouquets of flowers.   Having a bodyguard in Bulgaria is similar to having a housekeeper or a lawn guy here in the U.S., and Slavi made sure that Lee had the best--Slavi's own guys.  The guards (whom Lee thinks must have been out-of-work wrestlers) escorted him everywhere during his time there, wearing three-quarter length leather coats which they would periodically open to "reassure" Lee that they were armed.  And of course the vehicle of choice was a bullet proof Mercedes!   Lee's appearance on the Slavi Show was quite an experience, with an interpreter translating the entire interview.  (I watched part of a video on YouTube of Slavi's interview with Dennis Rodman to get a sense of what it must have been like.  Suffice it to say that the guest takes an escalator down onto the stage where a Doc Severinsen-type band plays a welcoming tune.)   It must have been a hoot.

During the Q&A, a woman at my table stood up and asked the question that's on every Lee Child fan's mind--What in the heck are they thinking casting Tom Cruise as Jack Reacher in the upcoming movie One Shot?  (She did ask the question more delicately, couching it in terms of the creative control a writer has over the film version of a book, but everyone--including Lee--knew what she meant.)  For those of you who aren't Reacher maniacs, first, why are you still reading this?  Second, Jack Reacher is 6'6" tall and 250 pounds of muscle.  Notwithstanding the body that Cruise developed for his role in Rock of Ages, it's impossible to envision him as Reacher.  Lee's basic answer was two-fold.  A writer has absolute creative control over the film version of the book in the sense that he doesn't have to sell the rights if he doesn't want to do so.  Point taken.   And if you're going to make a movie, why not make it with a movie star?   Well, we'll see how it turns out (or not--the women sitting near me at the tea said they will not see the movie because they don't want Tom Cruise to taint their image of Jack).   I've penciled the December 21st release date into my calendar.

I could go on and on but you've probably figured out that seeing Lee was a huge treat for me.  If you want to read more about Lee, Reacher, and the books, check out http://www.leechild.com/faqcontact.php.  (At a minimum, take a look at the picture of the mysterious man playing Jack--does he bear any resemblance to Tom Cruise????)   For people who are already fans, there's some interesting info there that I'm betting you don't know.  And if you aren't already a reader of the Reacher novels, get thee to a bookstore or library and start reading.  You are in for a real treat!
at June 17, 2012