Memorial Day week-end is the official start of summer.  (You could have fooled me--it's felt like summer to me for quite some time now!)   And of course it's a time to honor our troops and veterans.   On Monday, the Isles Yacht Club will have an emotion-filled ceremony acknowledging the hard work and sacrifices of our military.  The week-end, though, is all about fun and games. 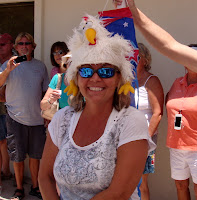 My curiosity was piqued when I saw chicken barnyard bingo on the schedule, so I headed over to check it out.  Janie Duke, head of the IYC social committee, was the mistress of events, and she was dressed for the occasion.   A large bingo board was positioned inside a chicken coop, and you could purchase one of the numbers for $5.   A chicken was then placed in the enclosure and participants cheered it on to--how can I say this delicately?--poop on their number.   Admittedly, it sounds rather gross, but it was actually lots of fun. 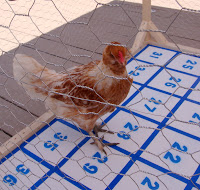 Robin Adair was the winner of round one, and took home a $180 pot.  (He also got to clean out the coop for the second round, but that's a small price to pay for all that glory and moolah.)  The chicken that was on duty for the second round was quite recalcitrant, and did not want to do its part for the festivities.  The third chicken had to be put in the coop as well to get things moving, and eventually there was a tie between Skip Mansfield and Jack Ford.  (Try to avoid the visual on that one.)   The third round also went to Skip, so he walked away with a cool $270!   Janie first saw this game on vacation in Belize and, yes, I do believe that there were adult beverages involved. 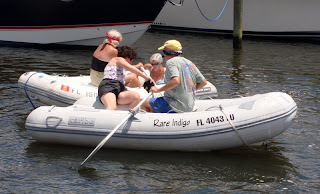 Next up was the blind dinghy racing.   Skip had invited me to act as his eyes in the event, which is pretty much what it sounds like.  One person is blindfolded and does the rowing.  The other person guides the oarsman around the course.  To make matters even more complicated, we had two buoys to round, and had to do 360 degree turns around each of them before heading to the finish line.

There were two heats of four dinghies each.  I  watched the first group struggle to find their way, and it was pretty amusing.   I had heard that one problem you could encounter was getting stuck between two boats, but I couldn't quite envision what that meant.   After watching for a couple of minutes, it became all too clear how easy it was to get tangled up (and that some fending off was often required!)   You might notice in this picture that the boats are pointed in different directions, and that's not because they were heading to different parts of the course!   The first race finally wrapped up, and I made my way into our boat to see what it was like first hand. 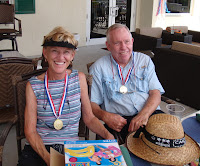 We got off to a strong start, having positioned ourselves (inadvertently) away from the other boats.  The best way to guide the rower is not to yell out which paddle to use (way too confusing when your right is their left) but to tap them on the leg on the side where they should paddle in order to maneuver around the obstacles.   We got to the first buoy ahead of the other boats and made our way around it without too much difficulty.  The problem came when the other boats arrived as we were finishing our circle.  It's tough enough to round a mark in a crowd when you can see what the heck is going on.  When the captains are blindfolded, it's downright impossible (not to mention a bit dangerous with oars flying around).  Eventually, we ended up second in the heat, making it to the finals.  Sadly, we became enmeshed with two other boats more or less at the start of the last race and found ourselves seriously out of position.   The overall winners of the event were Jackie and Bob Whittaker (with Jackie on the oars), and they proudly wore their medals the rest of the afternoon.

There were lots of other fun things going on over the week-end as well.  There were some mean pool volleyball games and nightly movies by the pool.  There was a pig roast and a bring-your-own-steak BBQ.  There was a variety of musical entertainment.  But most of all, there were a lot of people enjoying some nice comraderie.   Really, who could ask for anything more?  Happy summer!
at May 27, 2012