What's the sense of having a blog if I can't blow my own horn a little bit???   I was thrilled when I received an e-mail a couple of months ago asking if I wanted to do some freelance work for Florida Weekly's "Best of Southwest Florida" 2012 edition.   I knew that Kathy Grey, editor of the Punta Gorda/Port Charlotte edition of the paper, looks at this blog, but I still thought the e-mail might have been sent to me in error.  The e-mail also included an invitation to attend a brainstorming session in Fort Myers to talk about the edition.    It sounded like fun to meet some real writers and learn more about the process of putting together a paper, so off I went.   The writers were very friendly, and it was fun to see their camaraderie and listen to their give-and-take.   I was feeling a bit self-conscious but generally okay about being there when Kathy arrived and responded to my greeting with, "Oh, did I invite you to this meeting???"    (She made a quick recovery but I still felt quite a bit like a balloon at the moment that it is pricked with a pin.)   I persevered, though, and ended up having 12 submissions published in the edition, which came out last week.  Here are a couple of my favorites: 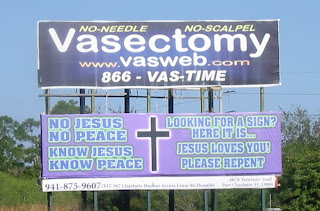 Best Billboard Juxtaposition
Drivers truckin’ on down the highway are constantly deluged with billboards advertising fast food restaurants and economy hotels.   In Charlotte County advertisers like to give travelers an opportunity for other experiences during their journeys.    Heading north on I-75 you can see this unusual juxtaposition of services provided by local businesses.   The use of the word “no” in both billboards creates a nice sense of unity between these potentially contrary messages. 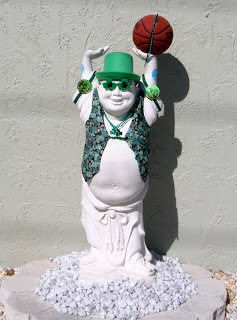 Best Wardrobe
>>Bal Harbor Buddha
In 2002 Doug and Kris Shadle came upon a statue of Buddha and decided that he would fit perfectly in the alcove in the front of their home.  Buddha looked so happy there that the Shandles decided he would enjoy dressing up to participate in holidays and Punta Gorda goings-on.  A tradition had begun.  After Hurricane Charley, people stopped by to make sure that Buddha had survived the storm.  Buddha now has a good number of followers who drive by to check out his attire, sometimes making a stop to leave him flowers, cards, and the occasional chocolate treat.   If you check out the steamer trunk with Buddha’s clothing choices, you’ll have no doubt that he has one of the best wardrobes in Charlotte County.

Best Place to Pick Up a Couple of Oars
>>War on the Peace Dragon Boat Festival
Back in 2008, US News & World Report named Punta Gorda one of the top ten healthy places to retire.  The article cited the Charlotte Harbor Paddlers as one example, calling them a “fit-crazy group of mostly seniors who…compete in frenetic, muscle-powered dashes in something called a dragon boat.”   Thanks to the Draggin’ Dragons (the CH Paddlers’ highly inaccurate name), the War on the Peace Dragon Boat Festival has been added to the long-list of annual events in Punta Gorda.  Members of the Draggin’ Dragons organize the Festival, coach the 20 person teams and serve as steerspeople for the boats during the 350 meter races.  Whether you’re paddling or cheering your favorite team on, you can feel that fiery burn as the boats make their final push to cross the finish line.
Details:  www.puntagordachamber.com

I'm already compiling ideas for next year's edition!  It's just another great excuse to get out there and check out all the fun that Southwest Florida has to offer.