We all know the quote from the movie Forrest Gump:  "Life is like a box of chocolates. You never know what you're going to get."  That's basically how I like my theater.  I make my choice of what to get tickets  to see based on the enticing outer shell, whether it's the playwright or an actor or the tantalizing blurb describing the play.   I want the gooey interior to be a surprise, though (hopefully a delicious one rather than one that you want to spit out), so I generally don't read any reviews of a show before I see it. 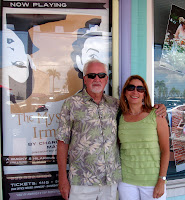 In the case of  The Mystery of Irma Vep:  A Penny Dreadful, the exterior shell that got me into the theater was the blurb about the show:  "a hilarious spoof that is three parts The 39 Steps and one part Jane Eyre."   (In case you're wondering, as we were, a "penny dreadful" is a type of sensationalized British serial fiction from the 19th century.)   I saw a production of The 39 Steps on Broadway and it was one of the most clever and entertaining shows I'd seen in a long time.  If  Irma Vep was cut out of the same cloth, I didn't want to miss it.  So off I went to the show last Saturday with the ever-so-eager Bruce, Dorrit, and a group of PGICA Floridians (who go to Florida Rep en masse at the group rate of $19 per ticket--it's worth the price of membership!)

When you enter the lobby of Florida Rep, the tone is quickly set for the production you are about to see.  On occasion there are characters on hand to mingle with the theatergoers.   More often, though, you get the flavor from the loop that's running on the small screen TVs.  Sometimes it's a clip from a scene in the show.  On Saturday, though, there were clips from Wuthering Heights and from a movie featuring a werewolf.  Hmm.   As the lights went down, horror music started playing and with a crash of thunder we were introduced to Jane Twisden, the maid of the manor, played by Mark Chambers, and Nicodemus Underwood, a stablehand (for lack of a better word) played by Brad DePlanche.

I can't really tell you much about the play itself as I had some trouble following the plot line.  There were werewolves and vampires and mummies.  There were moors and heaths (that's the Jane Eyre part) and pyramids and a sarcophagus.  Having now read a review of the show, there were apparently lots of references to Rebecca and other Hitchcock movies (that's the 39 Steps part) that I generally missed.   What I didn't miss, though, was the fact that Chambers and DePlanche played all eight roles in the show, and had a great time doing so.  It was fun and funny to watch the quick transitions, particularly as DePlanche  transformed himself from Nicodemus to Lady Enid and back within the course of a couple of minutes.   (Interestingly, in order to obtains rights to put on the play, you have to agree that the roles will be played by actors of the same sex.  Cross-dressing is de rigeure in this show.)

The play was pure camp, with a fair amount of sophomoric humor thrown in for good measure.  It reminded me of Charles Busch plays from the 1980s such as The Lady in Question and Psycho Beach Party.  (In fact, Irma Vep was first produced at playwright Charles Ludlam's Ridiculous Theatrical Company off-off-Broadway in 1984, so this show was a contemporary of Busch's shows.)

At the end of the day, I found the gooey interior of Irma Vep distinctly average.  I didn't want to spit it out but I wouldn't choose this chocolate in the future either.   It did, however, put me in the mood to check out the drag queen bingo in Port Charlotte that I just read about in the "Best of Southwest Florida" edition of Florida Weekly.  Maybe I'll see you there!
at May 07, 2012