An Afternoon at the Ringling Estate

Spending an afternoon at the Ringling Estate is like going to a three ring circus.  You just don't know where to look!   There's Ca' d'Zan, the beautiful over-the-top home of John and Mabel Ringling situated on Sarasota Bay.  There's the Museum of Art, with works from Ringling's personal collection in the main museum and special exhibits in the Searing Wing.  And there are the Circus Museums (which include the Tibbals Learning Center).   Last Sunday I spent the afternoon onsite and found myself going back and forth between the Museum of Art and the Circus Museum in order to get the benefit of docent-led tours.  It was quite a varied afternoon! 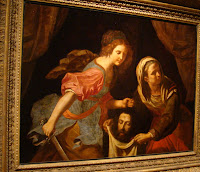 The purpose of my visit was to see the Japanese Art Deco exhibit in the Searing Wing.  Alas, I didn't read the fine print and see that the exhibit doesn't open until mid-July.  So I satisfied myself instead with the Lumosity exhibit that featured a variety of artists' works whose art makes special use of light.  The exhibit was a complement to the Asolo Repertory Theater's production of Red, John Logan's play about artist Mark Rothko.  (You might recall that I was gaga--that's the technical term--over Florida Rep's production of the show.)   One of the statements that Rothko makes in the play (in reference to Caravaggio) was, "He illuminates the picture from within.  He gives it inner luminosity.  It lives...."  The work shown here is Judith with the Head of Holofernes and the artist is referred to only as "after Guercino".   It truly is a luminous painting, with light seeming to emanate from Judith's face.  The exhibit was small but contained a wide assortment of works, from Robert Mapplethorpe's photograph Irises to Rembrandt's etching Second Oriental Head to Edward Hopper's watercolor Jeuness House Looking North. 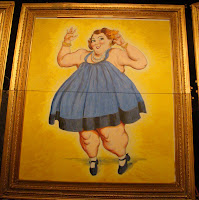 From there I was off to catch a tour of the Circus Museums.  Needless to say, the mood is quite different there! The last time I visited the Ringling, the Tibbals Learning Center wasn't open, so this was the first time I saw the "banner of freaks" that greeted circus-goers once they purchased their tickets.  There were teasers for the bearded lady and the three-legged man and the fat lady and the Siamese twins and an assortment of other outcasts who made their home with the circus.   I learned that the fat lady was weighed each pay day and that her salary was based on her poundage.  I also learned that the conjoined twins each married and had, respectively, ten and eleven children.   (The logistics for that must have been nearly as complicated as moving the circus across the country!)  The Tibbals Learning Center is best known for its display of the world's largest miniature circus, which is a replica of Ringling's and Barnum & Bailey's Circus from 1919-1938.  Miniatures aren't really my thing, but the detail and craftsmanship are quite remarkable. 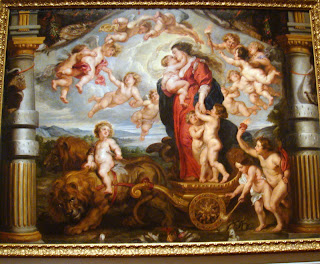 Then it was back to the Museum of Art for a tour of the permanent collection.  I ended up being the only person on the tour, which was actually a bit uncomfortable because I'm not overly enthusiastic about the Old Masters whose work is the focus of Ringling's collection.   The centerpiece of the collection is a set of five huge Rubens oil paintings  that served as "cartoons" (full size studies) for his Triumph of the Eucharist series of tapestries.  Obviously, these are important works, but I just don't respond to them.  Here's where having a docent comes in handy.  She pointed out the similarities between Baroque style paintings and the circus.  They're both dramatic and full of color and movement  and light.  She put the series in the context of Martin Luther and the Counter Reformation and the Catholic Church's struggle to retain its followers.  In a time when most people couldn't read or write, art was a powerful means of communicating the Church's message.   Needless to say, having her insights as we walked through the galleries made the tour much more interesting.  (She did lose me, though, when she showed me her favorite work, which was a painting of a lot of dead animals on a table and pretty grotesque. She explained the symbolism of the animals from mythology, with the boar representing masculine power and the swan representing innocence and the dove representing love.  Ultimately, you could tell from the clues that the table showed a wedding feast.  In case you had any questions about what the future held for the to-be-wed couple, the exposed reproductive organs of one of the animals said it all.   Definitely not a painting that I'd want to have in my living room!)

It was a fun and educational afternoon, and I didn't even make it over to Ca' d'Zan.   With so much to see, the Ringling Estate is well worth the $25 admission fee.  I would be remiss, though, if I didn't put in a plug for becoming a member of the Century Club at the Visual Arts Center in Punta Gorda.  One of the benefits of your $100 donation is membership in the North American Reciprocal Museum program, which permits you free entry into 581 museums across the country, including the Ringling Estate and the Dali Museum in St. Pete.  I'll be taking advantage of my membership again in July, when I go back to see the Japanese Art Deco exhibit.  I can't wait!