When I was 12 years old, I would play the 45 rpm version of the theme song to "Hawaii Five One" on my record player and dance frantically around my room.  I could just hear the waves crashing around me and visualize myself in an exotic locale.   (I bet you can hear the song now!)   Despite my attraction to the music, I never had any desire to learn to surf.  I am a clutz from way back, and could only imagine myself falling off the surfboard (probably from a prone position), getting bonked on the head, and washing up on shore like a beached whale.  So when an e-mail from Groupon arrived in my inbox with an offer for a day at the beach with a paddle boarding experience, I clicked right on through.  Dorrit, however, is a bit more adventurous than I am, and I somehow found myself on the beach last week-end getting a two minute instruction on the "sport" before heading into the water. 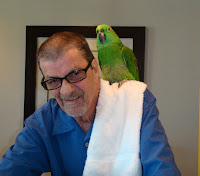 The sponsor of this Groupon experience was a water sports shack based on Fort Myers beach behind the Best Western Plus.  (The "plus" makes all the difference.)   As we headed through the lobby to the beach, we were "greeted" by this dude with his parrot.  (He was not the least bit friendly.  What's with that?  Isn't the parrot part of the schtick?) 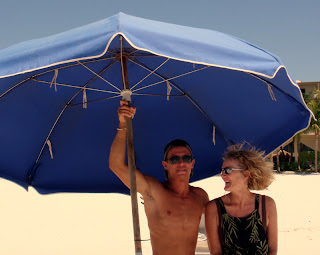 The beach was gorgeous, and not nearly as crowded as we thought it would be.  With the Groupon coupon, we also got two beach chairs and an expansive beach umbrella to shade us from the sun.   We had our own equivalent of a cabana boy set us up.  His name was Arlin.  My father's middle name is Arlen so we had a chat about the name.  He told me the spelling, and said that he was named for Senator "Arlin" Spectre from Texas.  A couple of notes:  Arlen Spectre (note the correct spelling is with an "e") was from Pennsylvania.    He also was an arch conservative who is best known for his anti-abortion stance.  I can't quite figure out why anyone would name their kid after him (or, if they wanted to, why they wouldn't spell the name correctly.)    Arlin was cute, though, so at least he has that going for him.   But I digress. 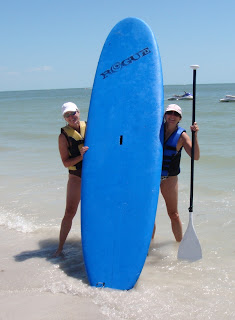 Then it was time for our paddle board adventure!   We started out kneeling on our boards as we got used to the balance and maneuvering with the paddles.  After a few minutes, I decided to try to stand up.  I'm sure you've seen surfers in movies or TV shows fluidly jump from a prone position on their boards to their feet.  My experience was nothing like that.  Using the paddle as a tripod, I started in a crouching position and worked my way up to an approximation of standing.  (Dorrit said I looked like "homo non-erectus," which I think was a polite way of saying that my butt was sticking out.)   After a couple of minutes, I made my way back down to a kneeling position, relieved that I hadn't toppled into the water.  (There was plenty of time for that!)   It wasn't long, though, before we both were standing on our boards and paddling back and forth across the massive waves.  I did fall off my board once, and the water felt great.   It wasn't even too difficult to retrieve my hat and swim back to the board and get back on.   It ended up being a blast, and we were obviously quite the advertisement for the activity because people were waiting for our boards when our hour was up.   From now on, you can call us "Dorrit-o" and "Nanette-o"--I'm sure Jack Lord wouldn't mind!

Email ThisBlogThis!Share to TwitterShare to FacebookShare to Pinterest
Labels: Exercise