It's a Wrap: Amsterdam, Part 4 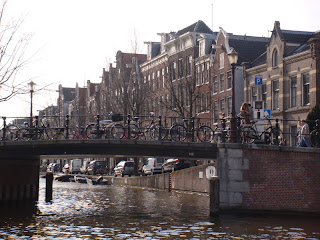 One of the most fun things about being in Amsterdam was just soaking in the feel of a European city. The air just seems different somehow.  The sensibilities of the people are certainly different.  And then there's all that history.   We decided to go a canal boat tour to see the city from the water and learn a bit about its development.   (As an aside, the ads say that this is the "fun" way to see the city--it was actually a bit more like the slow boat to China.)   Here are a couple of "fun" facts:  Amsterdam has more than 100 kilometers of canals and over 1500 bridges (hence its nickname "Venice of the North".)  In the 17th century, the three main canals--Herengracht, Prinsengracht, and Keizersgracht--were dug and established the grachtengordel (belt of canals) which surrounds the city.  (The grachtengordel was added to the UNESCO World Heritage List in 2010.)   The canals are concentric, radiating out from the center of the city, which--when combined with the difficulty of the names--caused a lot of confusion for these tourists.  Anyway...

The existence of the canals has resulted in a huge houseboat community, with the number of moorings currently limited to 2500.  On our canal boat tour, we got an eye level view of the houseboats and an occasional glimpse into their living space.  (As you might have guessed by now, there's a museum for everything in Amsterdam, and I was sorry that the Houseboat Museum was closed when we wanted to visit.)  It was interesting to see how the houseboat owners had decorated their homes with gardens and outdoor furniture   It's not a very private way to live, but it obviously works for an awful lot of people.

You might have noticed that there are bicycles in both of these pictures.  Amsterdamers are crazy for their bikes, and cycling seems to be the most popular way for people to get around.   According to Wikipedia, in 2006 there were 465,000 bikes in Amsterdam, and I feel like we dodged every one of them during our time there!   Almost all of the bikes we saw had seats on the back for a second passenger--who would often ride sidesaddle--and many had a cart attached to the front to transport kids or groceries.   One day we saw a family of five traveling on two bikes, which seemed quite amazing to us and quite ordinary to everyone else. 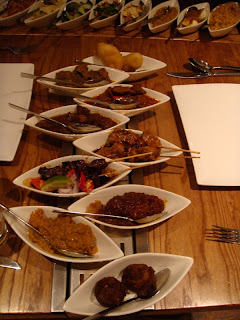 No visit to a new place would be complete without checking out the local cuisine. First, a bit of history.  Back in the 17th century, Dutch spice traders started a trading post in what is now Indonesia.  Eventually, the area became colonized as the Dutch East Indies, and Indonesian food is now a staple in Holland.   The rijsttafel (rice table) developed as a way of dining when the Dutch wanted to sample selectively from Indonesian food.  Our own rijsttafel experience was at Restaurant Blauw and involved 18 little plates of food ranging from chicken satay to meatballs to fish with curry to fried plantains.   My personal favorite was some kind of goat dish (which I certainly would not have ordered on its own off the menu!)   It was incredibly delicious and a fun way to eat.    Our other typical Dutch dining experience was at a restaurant our hotel recommended named Haesje Claes.  I ordered a "stomppot" or dish with potatoes mashed with other vegetables (carrots and peas in this case.)  The potatoes were served with meatballs and sausage and a ground beef on top.   It was kind of like a shepherd's pie and was pretty tasty although, as you can imagine, pretty heavy.  After dinner, I waddled back to our hotel, satisfied that my Amsterdam experience was complete.

All in all, it was a great vacation.   Does Amsterdam now top my list of favorite European cities?  Not by a long shot.   Paris is much more beautiful, London is much more fun, and Rome is much more interesting.  Still, it's always fun to experience a new culture and see new things and eat different foods, and the trip has made me start thinking about where I'd like to travel in the future.  Prague and Budapest are definitely on the list.  My passport is woefully empty of stamps for any of the South American countries.  And of course there's Australia and New Zealand.    For now, though, I'm back to enjoying life in my own canal-lined city of Punta Gorda.