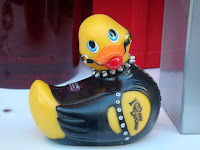 Amsterdam.  A city synonymous with canals, tulips, bikes, and cheese. Yet when I mentioned to people that my friend Andrea and I were heading to Amsterdam for a few days, the conversation inevitably turned to whether we were going to hang out in a hash den and visit the Red Light District.   So, while our trip gave me lots to blog about,  I thought I would lead with the tawdry.

Yes, prostitution is legal in the Netherlands.  And yes, there are women who sit in windows in Amsterdam's Red Light District whose services are available for purchase.  (As an aside, the few we saw all seemed to be texting while waiting for customers--"love" in the 21st century!)  The streets in the Red Light District reminded me of Bourbon Street at its worst with the hordes of half-drunken men and tourists (not that the two groups are mutually exclusive) checking out the merchandise.   I felt like I needed a shower when I got back to the hotel, and that was before I did some reading about the link between prostitution in the Netherlands and human trafficking. 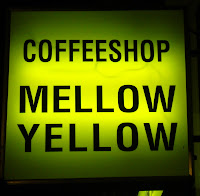 The Netherlands also has a non-enforcement policy of its laws with respect to the use of "soft" drugs like cannibis.  This has led to the proliferation of "coffee shops" throughout Amsterdam where you can get a cup of coffee and a joint and have a smoke with your buddies.  Mellow Yellow was on the main street by our hotel and was a landmark for us in our travels.  (While the bright yellow sign was like a beacon, we could have found Mellow Yellow by the "skunk" smell alone if push came to shove.)  If you're interested in checking out this part of the Amsterdam scene, get there this year because new laws prohibiting the sale of pot and hash in coffee shops to foreigners will go into effect on January 1, 2013.  (The rationale of letting Netherlanders imbibe while preventing foreigners from doing so is a bit unclear but the government seems to feel that the ready availability of drugs in the country is attracting an undesirable foreign element.  Perhaps stopping the practice altogether might be a better policy, but who am I to say?) 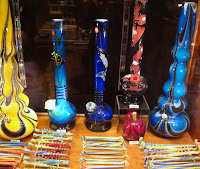 For people who are more back to nature, you can buy cannibis seeds at one of the local head shops and grow your own dope.   (Production of cannibis is technically illegal in the Netherlands, but this law also apparently goes unenforced.)  The shops also sell a wide variety of bongs and pipes for your smoking pleasure, some of which are quite utilitarian and others of which are beautiful pieces of blown glass that you wouldn't be surprised to see in a nice craft shop or a museum. 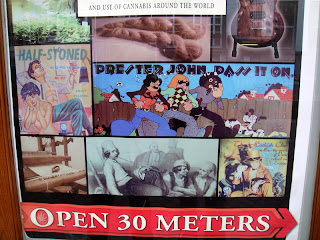 Speaking of museums, if you're interested in learning more about walking on the wild side, you won't want to miss the Hash, Marijuana and Hemp Museum.  Sadly, our schedule did not permit  us to learn about the history and use of cannibis around the world.    I have no doubt, though, that it would have been an interesting counterpoint to the works of the Old Masters that we saw at the Rijksmuseum.