From Starry Night to The Night Watch: Amsterdam, Part 2 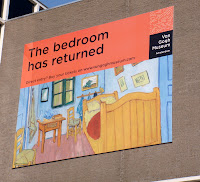 Andrea and I have traveled together a lot over the years and we used to pride ourselves on being able to tour any reasonably sized city in one day.   So having three full days to explore Amsterdam actually created a bit of a dilemma--what would we do to fill all that time????  Luckily, there was plenty to see, and we decided to start with the Van Gogh Museum.  First off, a word about how to pronounce Vincent's name.  Americans say "van go" while Brits say "van goff."   Both pronunciations are incorrect as it is a much more guttural sounding "goch"--sort of like you are clearing your throat.  This was just one of the many confusing things about the Dutch language that we encountered on our trip, but I digress from the point of this post--our visit to some of Amsterdam's museums. 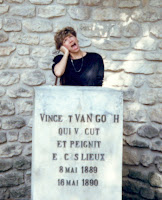 Most people are familiar with bits and pieces of Van Gogh's life and his paintings, especially his Sunflowers (which we saw) and Starry Night (which lives at the Museum of Modern Art in New York).   Did you know, though, that he was an artist for only ten years of his short 37-year life, creating over 2100 works in that period?   Vincent was deeply religious in his younger years, and turned to art to leave "a certain souvenir to mankind in the form of paintings [that were] not made to comply with this or that school but to express genuine human feeling."  His early work was surprisingly dark, and reflected the influences of Millet, Daubigny, and Rousseau.  Over time, though, with the influx of Japanese woodcuts to Europe (which Vincent liked for their "decorativeness, bright colors and daring compositions") and his association with artists like Toulouse-Lautrec and Gaugin, Vincent developed his distinctive use of color and space.  Van Gogh's dream was to create an artists' colony, and Gauguin was one of his few contemporaries who signed on to this vision.  Their alliance was short-lived, though, and the infamous incident in which Van Gogh cut off his ear occurred after his falling out with Gaugin.  (The picture is from a trip Andrea and I took to Arles--where Van Gogh was institutionalized--many years ago.  I'm sure that you'll agree that my re-enactment is quite tasteful.)

We also saw a special exhibit of works from the Van Gogh Museum's collection entitled "Beauty in Abundance" that celebrates the development of graphic arts and posters during the period from 1890-1905.  I enjoyed this exhibit tremendously, perhaps even more than Van Gogh's own works!   During that period, artists throughout Europe were experimenting with color lithography, etchings and woodcuts, and the result was fun and visually exciting.  The exhibit featured some wonderful works by artists such as Toulouse-Lautrec (including some posters and programs that he created for the theater and cafe concerts) and Henry Gabriel Ibels, whom I hadn't heard of before (including the poster pictured here.) 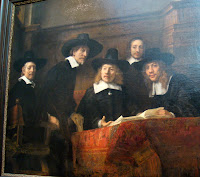 No trip to Amsterdam would be complete without a visit to the Rijksmuseum, the home of the Masterpieces of the Golden Age.   The Museum is being renovated, so we were not able to view the entire collection.  I have to admit that, while I understand that Rembrandt was a key figure in the evolution of art, his work isn't really my cup of tea, so I wasn't too disappointed that we only got the highlights.   Rembrandt's Night Watch was displayed in all its glory in the newly furnished Phillips Wing that uses LED light to illuminate the work.  We also saw Rembrandt's Syndics of the Amsterdam Drapers Guild aka The Sampling Officials (a detail of which is pictured to the left).  This painting shows a group of men performing the task of checking the quality of a certain type of cloth.  I'll admit that Rembrandt's use of light was striking and that the study of his paintings yields interesting historical tidbits (like the fact that the guy standing in the background must have been a servant because he isn't wearing a hat), but I was still happy to make my escape after an hour in the Rijksmuseum's galleries. 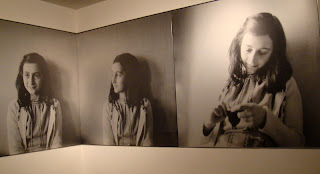 The final of the big three museums in Amsterdam is, of course, the Anne Frank House.  Seeing the place where Anne wrote her famous diary (which has been translated into over 70 languages) was an incredibly moving experience.  I was particularly struck by the humanity in the rooms where the Frank family, the van Pels family and Fritz Pfeffer lived.  There were hash marks on one wall where Otto and Edith Frank measured their daughters' growth during the two year period they were in hidiing.  Pictures of movies stars and postcards were glued to the wall of Anne's bedroom, and a copy of a stock market game that Peter van Pels received on his 8th birthday was on display.  It was clear that these people were trying to live as normally as they could under impossible conditions.  The exhibit includes a number of powerful videos featuring Otto Frank (the sole member of the family who survived Auschwitz), Mies Gies (who worked for Otto and assisted in hiding the family), and Jacqueline van Maarsen (Anne's best friend).  The black-out curtains on the windows give museum-goers a small sample of the sensory deprivation that Anne and the others experienced day after day.   Visiting the Anne Frank House was an experience unlike any other I've had, and one that I won't forget any time in the near future. 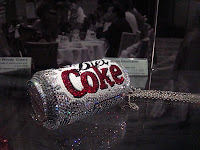 The last museum that we visited was The Museum of Bags and Purses.  We went on a lark, expecting to look at pop art purses and bags that were carried on fashion runways.  The Museum actually chronicles the history of the purse over the last 500 years and was much more interesting than I expected.  We saw bags designed to carry relics and coins and love letters.  We saw Limoges wedding purses from the early 18th century with portraits of the bride and groom painted on enamel.  We saw "charletains" that hung from a woman's waist and to which she could attach items such as an umbrella (although we didn't think that would be particularly comfortable).  We learned that men carried purses until the 17th century when some bright designer figured out that it would be handy to have pockets in clothing to carry items while leaving your hands free.   The museum did have its share of silly bags as well, such as the bag shaped like the cruise ship "Normandie" which first class passengers received on the ship's maiden voyage from LeHavre to New York in 1935 and (my personal favorite) the crystal-laden bag shaped like a Diet Coke can. Looking at this bag reminds me that I'm feeling a bit jet lagged at the moment.  Time to head to the frig for a Diet Coke to help me through the rest of my day.