Dorrit, Susan and I have been subjecting each other to "spontaneity tests" over the last few months.  You get an unexpected call.  "Spontaneity test!  We are at X.  Can you come meet us?"  So far, nobody has failed.   I got a call yesterday from Dorrit. "Spontaneity test!  We just decided to hop in our boat and head up to the Nav-A-Gator for a quick bite and to hear a few Jim Morris tunes.  We will be back in plenty of time for the Superbowl.  Can you come?"    Having determined that the fact that I hadn't showered yet would not be an issue for this venue, I was out the door in minutes. 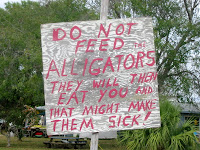 What a great afternoon!  We had a pleasant ride up the Peace River at 25-30 mph with Captain Bruce at the helm.  After about an hour, we arrived at the Nav-A-Gator.  Having never been there before, I wasn't sure what to expect.   "Rustic" is a bit of an understatement.  You are greeted with welcoming signs such as the one pictured here as you make your way into a courtyard area (for lack of a better word) where people have set up their own lawn chairs to listen to the music.  (Nav-A-Gator is known for its "trop-rock" and Jim Morris is the trop-rock king.)
We were lucky to find four seats at a table and settled in for some music and food.  (Perhaps anticipating the Patriots' performance in the Superbowl, Bruce wasted no time getting beveraged up.)    We managed to resist the appetizer of the day (onion battered deep fried green beans) and went instead for some hot dogs.  Trust me when I say that New York street vendors do not have anything to worry about!  Really, though, the outing was about the music, not the food, and I thoroughly enjoyed my first Jim Morris experience.

As we came in, Morris was singing one of his classic tunes, "Booze is the Duct Tape of Life."  (I surmised that it's one of his classics because there was a guy at our table wearing a t-shirt with the expression.)  Morris writes most of his own music, and he has a massive following.  It was really quite hilarious--given the demographics--to see the audience bopping its collective head along to lyrics such as "Drink 'til the girls get pretty."   (As an aside, I was a bit surprised to see Morris' clean-cut, almost preppy appearance.  I envisioned at least a loud Hawaiian shirt and some facial hair.)

The last song before we had to leave was another Morris classic (with lyrics something like, "Hop on the boat, It's a Nav-A-Gator afternoon, Come on and enjoy the show") that he invites the audience to play the kazoo along to.  Bruce miraculously pulled four kazoos out of his pocket so that we could play along.  I guess that I have never played the kazoo before since I kept blowing into mine rather than humming despite Dorrit, Bruce and Lindy's instructions.  I eventually managed to belt out a few notes before the song was over (much to the amusement of those around us.)  We laughed and danced our way back to the boat, and made it home in plenty of time for me to enjoy the Giants' victory over the Patriots.  A great ending to another great day in Southwest Florida!