Kayaking with the Manatees

When I was growing up, I remember watching  TV commercials for Save the Children with spokeswoman Sally Struthers.  For a small donation, you could help a child in a developing country.  You would get a picture of the child and could become pen pals with him or her.  (As I'm writing this, it strikes me how quaint that all sounds.  Watching commercials rather than fast forwarding through them? Writing physical letters?  Those were the days!)   You are probably wondering what the possible connection could be between kayaking with manatees and Save the Children.  It turns out that when my friend Susan was growing up in a little town in Ohio, she saw an ad for the non-profit organization Save the Manatees (co-founded by Jimmy Buffett and then-Florida Governor Bob Graham) and "adopted" a manatee.  Just like with Save the Children, she got a picture of "her" manatee, but I don't think they became pen pals.  Susan was obviously destined to live in Southwest Florida, and even more obviously couldn't pass up the Groupon offer to join Manatee Guides on a kayak adventure.

Manatee Guides operates out of two locations--Manatee Park in Fort Myers and Lovers Key near Estero--depending upon where owner and guide Tim Martell thinks you can get the most sightings on a particular day.   Susan and I joined him last Friday at Manatee Park on the Orange River for our outing, and it was a blast.

Before we hit the water, Tim started with a kayaking tutorial,  the first I've ever had.  After going over the basics--wide grip on the paddle, wide feet to maintain balance--he talked about the importance of not leaning over the side of the kayak to get a better look at the manatees.  The objective of the day was to kayak with them, not to swim with them!  (After he told us about the aquatic parasites that live on manatees and how they can get into your system if you come into contact with them, I was all in favor of staying safely on top of the water!)  Then we were off! 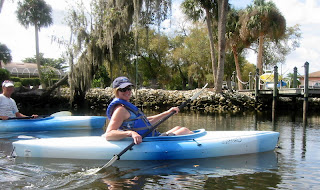 Once we got underway, Susan started singing an old camp song that I had never heard.  "My paddle's keen and bright, Flashing with silver, Follow the wild goose flight, Dip, dip and swing."   We probably could have come up with a funny adaptation for manatee watching, but by the time she was through with the song we were in the "manatee zone" and had to focus our energies on spotting our prey.  It didn't take long before we realized that there were manatees swimming all around us. They have air holes like dolphins, so if you sit patiently and listen, you can hear them come up to breathe.  Since a full-grown manatee weighs around 1000 pounds, I wasn't sure that I wanted one to surface near me--and I certainly didn't want one to come up for air under my kayak!  So I was perfectly happy watching from a bit of a distance as the manatees' tails and hairy looking backs broke through the water.

While we were floating around, Tim gave us some manatee fun facts.   As Susan learned at a young age, manatees are endangered.  The manatees we were sharing the Orange River with were of the West Indian species, and there are between 3200 and 4900 left in existence.   Manatees in captivity (like at the Mote Aquarium in Sarasota) will live approximately 65 years; in their natural habitats, their life expectancy is reduced to 25 years due in part to encounters with boats.   Manatees generally travel between five and seven miles an hour (so they can travel the 22 miles from the Gulf to where we were in a morning's time).   They ARE in fact hairy, and the whiskers (vibrissae) that sprout from their snouts are attached to nerve endings and are put to use while scavenging for food.

After hanging with the manatees for a while, we paddled up the River, stopping at a number of "education stations" along the way.  (Tim is a Florida naturalist and was eager to share his knowledge with the group.)   The most memorial tidbit that he shared is that Spanish moss is part of the pineapple family (if you can figure that one out, let me know!) and was used for stuffing car seats, pillows and mattresses until people realized that the moss carries pesky little insects known as chiggers.   (As someone pointed out, they might have been the original bedbugs!) 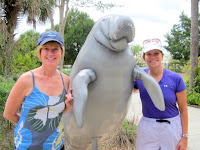 The day really was about the manatees, though, and it was lots of fun. Neither Susan nor I was successful at snapping a picture of a manatee surfacing so we had to settle for having out photo taken with this landlubber near the gift shop.   We headed home quite satisfied with our outing and with little manatee Christmas tree ornaments to remember our adventure by.   Keep an eye on Groupon for your own opportunity to kayak with the manatees.  Manatee Guides was named one of Groupon's top 25 businesses in Fort Myers, so Tim will be periodically offering discounted tours to Groupon subscribers.  He told us that he actually prefers the Lovers Key location because you often see dolphins and turtles and other wildlife while you're on the water.  Maybe I'll see you there!