New York City had its first snowfall of the year on Saturday.  I might not have known but for the fact that my friend Wendi was visiting from NYC over the week-end and happily reported this as we were driving to Placida/Boca Grande for a day of kayaking and hanging out at the beach.  Yes, it's a tough life here in Southwest Florida, but somebody's got to do it!

Back in the fall, Dorrit and I each purchased a Groupon coupon for a Wolverton Trails Kayak tour for two in Placida with O-Sea-D Aquatic Adventures.  It sounded like a fun activity to do with a visitor, and I was right.  We met Vince Molnar (the wet-behind-the-ears, marine biology degree-holding owner of O-Sea-D) at an active boat ramp in Placida bright and early.  Wendi and I had a tandem kayak, which I thought would make the outing easier and more fun for both of us.  (More about that later!)   We launched promptly at 10:00 and headed out for our adventure.

Vince was a fantastic tour guide.  It's always fun to be on the water, but to be with someone who actually knows something about marine life added a lot to the day.  Our first stop was an osprey nest.   We learned that ospreys mate for life, and that the female osprey generally lays three eggs at a time. It was sounding very Ozzie and Harriet-like until Vince told us that the puniest of the three offspring is harassed and kicked out of the nest by its siblings to fend for itself.  We were all a bit depressed by this fact but we got over it when some dolphins made a guest appearance, one of which actually swam under Bruce's kayak.  It was breakfast time for the dolphins and they were pushing fish towards the shore where it would be easier to feast on them.
With the help of his polarized sunglasses, Vince found some interesting water creatures to show us.  The first was the incredibly disgusting sea hare.  This hermaphroditic member of the mollusk family is sort of like a snail without a shell.  You can't tell from this photo but when you see its "face" (using the term very loosely), a sea hare has two little ear-like things that stick out and look like rabbit ears (hence the name).  Our sea hare was not happy being a part of our show and tell and spit ink to indicate its discontent.  (As I am writing this, I feel my nose wrinkled up in disgust.  This thing was really yucky.) 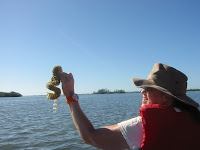 Next up was the egg casing from a lightening whelk, another member of the mollusk family.  The casing was translucent and kind of funky looking.  (As you can probably gather by this point, Wendi wanted to check everything out up close and personally.)  Vince also found a banded tulip snail for the group.  One tidbit about this creature is that, while it looks innocent enough, it has a sharp "nose" that it uses to inject poison into its prey and adversaries. 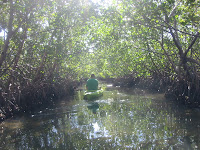 We paddled through the Wolverton Trail, which is a narrow swamp "trail" lined by mangroves on either side.  It was recommended that if you were in a tandem kayak, only the person in the back paddle (that would be me).   Wendi and I somehow ended up at the head of the pack and it was apparently quite hilarious to those behind us (particularly Bruce, who said we were doing quite a fine Benny Hill imitation as we crashed into tree limbs and roots with great regularity).   In my defense, I couldn't quite see where we were going.  (I also am fairly klutzy, but my story is that it was hard to see and I'm sticking with it.)   Notwithstanding this slight difficulty, this was my favorite kayak outing so far, and I was sorry when it was over. 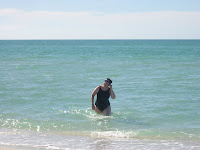 Wendi's water day was not over, though.  We had packed a picnic lunch and headed to the beach at Boca Grande.  After lunch, we settled into our chairs to enjoy the sand and sun and no more than five minutes had passed when Wendi decided to go for a swim.  A swim????   The water temperature had to be in the--gasp--high 70's!  Wendi said that the water was a bit cooler than she had expected but that the beautiful weather had caused her to forget that it was January.  (It happens to the best of us.)

Wendi has now returned to New York and winter.  I'll continue to enjoy being able to kayak and bike and enjoy the outdoors even though it is only January.   Next up is kayaking with the manatees.  As I said, it's a tough life but somebody's got to do it!