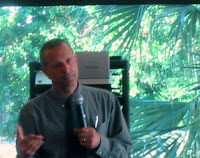 Did you know that the Punta Gorda's City Council has its own mission statement and that the City has made significant progress towards the development of a 15 mile "ring around the city" for bikers and pedestrians?   These are just two of the interesting tidbits that I learned when City Manager Howard Kunik spoke this week at the Isles Yacht Club's monthly lecture series.

Kunik is one of the most public faces of Punta Gorda, and he is a great spokesman.  I've never had the opportunity to hear him speak before, and he exudes professionalism and competence while maintaining a very likable and approachable demeanor.  Kunik has a Masters in Public Administration from George Washington University and a Bachelor of Arts Degree in Urban and Environmental Studies from Case Western University.  For some reason, I was surprised to hear that city government in our little town (population approximately 18,000) has such a credentialed manager.

In any event, I learned a lot during Kunik's talk. For instance, the City Council is currently soliciting input from its "stakeholders" on the development of its 2013 strategic plan.  The City Council's current mission statement is to "promote the unique character and environment of Punta Gorda while enhancing property values and advancing the quality of life."   The online questionnaire (which can be found at http://www.ci.punta-gorda.fl.us/index.html) asks for residents' thoughts on what the mission and goals of the City Council should be, how we view the impact of technological, demographic, and economic trends on the City and its ability to accomplish its mission and more.

I was interested to learn that our local government is using "Lean/Six Sigma" analysis to review some of its internal processes.  (IYC member Bob Petersen introduced the concept to Kunik and led  the training on how to implement Six Sigma.)  Back in my lawyer days, Prebon's CEO gave the executive committee an assignment to read a book about Jack Welch, Chairman and CEO of GE, and it talked quite a bit about how GE streamlined processes and reduced inefficiencies through the use of Six Sigma techniques.  In Punta Gorda, modifications have been made as a result of the use of Six Sigma to policies such as how many signatures are required before a memo or purchase order can be issued.

I was intrigued to hear about Punta Gorda's new Citizen's Academy, which is a series of interactive sessions designed to educate PG residents about city government in order to develop future leaders and create a more informed citizen base.  Registrations are being taken now for the summer session, which runs from May 1st - July 31st.  http://www.ci.punta-gorda.fl.us/userdata/publicworks/citizenacademyapp.pdf   The classes, which are limited to around 35 students, go on site tours of city facilities and hear from various department heads about what it takes to run Punta Gorda.

Kunik talked as well about ongoing development in Punta Gorda (including plans for an additional mooring field behind the Best Western).  As a relatively new resident, I wasn't familiar with some of the areas that were being discussed (or the "marketplace," which has apparently been in the works since Kunik became City Manager in 2005), but the audience was quite interested in hearing about these plans, and Kunik answered all questions that were raised.

I came away from the lecture impressed with both Kunik and our city government's efforts to involve its residents in the process of making Punta Gorda the special place that it is.   I am looking forward to learning more about what's going on in Punta Gorda when I participate in Kunik's City Manager's Bike Tour on March 31st.  The Tour is part of the Pedal & Play in Paradise events that are being sponsored by Team Punta Gorda and IYC (with IYC's share of the proceeds going to benefit the Leukemia & Lymphoma Society.)    You can register by going to http://www.pedalandplayinparadise.com/ .   Hope to see you there!
at January 20, 2012