The Nina and the Pinta (but no Santa Maria) 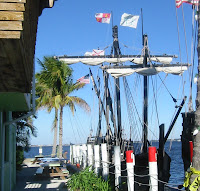 You never know what's going to happen next in Punta Gorda. On December 20th, the Nina and the Pinta sailed into Charlotte Harbor and docked at Fisherman's Village. My folks were here for a couple of days post-Christmas and Dad and I took advantage of the opportunity to go on board these hand-built replicas of Christopher Columbus' ships. Viewing the ships was mildly interesting. What made the outing enjoyable was talking to some of the volunteer crew members about the ships and their experiences onboard. 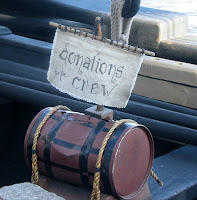 Both ships were built by hand by master shipbuilders in Brazil who still use design and construction techniques dating back to the 15th century. It took 20 men 32 months to build the replica 65 foot Nina and 36 months to build the larger Pinta. My favorite part of the Nina was the 550 pound tiller (they didn't have wheels for steering vessels back in the 1490s) that, surprisingly, takes only a few pounds of pressure to move. Even so, I can't imagine that it's very relaxing for the captains of these ships when they journey from point A to point B. I enjoyed hearing about the small cannon aboard the Nina that has the capacity to shoot three pound cannon balls as far as a mile. In the days of Columbus, the cannons were used for signalling the ship's location to the other boats in the fleet--a precursor to the game of Marco Polo. Today the ships shoot their cannons when they come into port but instead of cannon balls they spew hot dog buns! 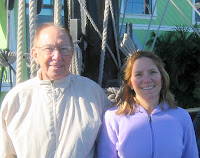 The most interesting part of the outing for me, though, was when my dad made a throw away comment about "when he worked on the river." What???? This was something that I'd never heard before. Turns out that when he was in his early 20's, he spent some time working for the Federal Barge Line on the towboat Mark Twain that ferried barges carrying coal and fertilizer back and forth on the Mississippi River between Minneapolis and Alton, Illinois. Dad was one of several deck hands on the steamboat, on watch for six hours at a time as the boat made her way through the 26 locks from its starting point to its destination. It wasn't a stretch for him to end up working on the river since his Uncle Blackie was a licensed riverboat captain at a time when captains couldn't rely on their GPS to warn them of sand bars and other obstacles along the way. It just goes to show that you never know what you're going to learn when you head out the door! I'm taking this as a reminder to keep myself open to new experiences as I head into 2012. Happy New Year!
at December 31, 2011