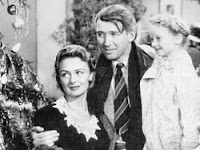 Everyone has seen Frank Capra's It's a Wonderful Life with Jimmy Stewart about a million times. Although the 1946 film was considered a box office flop at the time of its release, It's a Wonderful Life received five Academy Award nominations, including Best Picture, Best Director and Best Actor. Despite the inspirational story, I've often felt a bit morose after seeing the movie--perhaps the sacrifices George Bailey makes seem a bit too many--so I wasn't particularly interested in seeing Florida Rep's radio play version of the story. My curiosity was piqued, however, when I read an article in Florida Weekly about Mark Chambers as the Foley artist, so Dorrit and I decided to check it out. 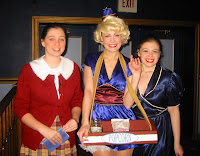 When we walked into the theater, we were transported to 1946. A cigarette girl walked around the lobby and a photographer decked out in a Columbo-style trench coat and hat with a press badge lurked in hopes of getting a picture of one of the radio stars.Young girls screamed and swooned when the radio star passed by them. Once we were seated, we became part of the WFRT audience for the radio show (something I hadn't considered) and we were entertained during the count down to going on the air. 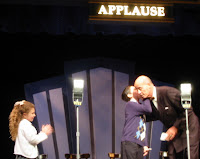 The announcer thanked us for braving the storm this Christmas Eve to come to the show and introduced the actors, including the adorable little girl playing the youngest daughter who carried a wooden box to stand on so that she could reach the microphone when she spoke.We were asked to silence any electronic devices that we might have brought with us from the future. Then it was show time!!! The show itself was faithful to the movie, and we all know the story. It was incredibly fun to watch the actors perform for both the audience members seated in their easy chairs at home and the audience members in the studio. Ryan Crider, who played George Bailey as a child, had all the earnestness of a young Jimmy Stewart, and Brad LaPlanche, who played Clarence the Angel, was a real character. Speaking of characters, Mark Chambers, the crotchety Foley artist, was a show in and of himself.

It was a blast to watch him create the sounds to set the scene for the audience at home. There was a bucket of ice water for when George rescued his brother from the frozen lake, high heels attached to poles for women walking in and out of the room, and a wide assortment of other paraphernalia used in unexpected ways. The commercial breaks were particularly entertaining. My two favorites were the Chiquita Bananas jingle with the girl singers dressed up like Carmen Miranda with banana bunches on their heads and Clarence the Angel taking on the role of an extremely constipated man extolling the virtues of his favorite laxative. (This was, after all, a show on WFRT!) I found myself rooting for George to realize that he had changed the world for the better and that his life was worth living in a way I never do when I watch the movies. I felt really connected to the characters and the story--which is ironic since the radio play is so much more transparent than a movie. As the "Applause" sign went off for the final time--we had seen the last show--the cast and crew congratulated each other and a few tears were shed. The audience left the radio studio with wide smiles and happy moods, realizing, perhaps, that we all do have wonderful lives.
at December 21, 2011