I spent Thanksgiving some years back in Sedona, Arizona and, while it was incredibly beautiful and the hiking was great, it was a bit "crystal-ly" for my taste. So you might be surprised to hear that I was excited about spending an evening at the Yoga Sanctuary listening to Robert Austin play his "healing" bowls. But with my "changes in latitudes, changes in attitudes," I couldn't resist checking out his performance with its promise of an experience of "a deep state of relaxation, mental clarity and restored energy."

When I arrived at the Yoga Sanctuary, it felt like a cross between a yoga session and a slumber party. Most people were sitting or lying on yoga mats with bolsters, blankets, and pillows (some of which had been brought from home!)

Austin was set up at the front of the room with his bowls, a Buddha and some candles, and his mother Jennie was seated at a xylophone off to the side. Austin, a retired corporate chef who turned in his mixing bowls for healing bowls, began the evening with a short talk about the "language of the bowls." The concert would start with the crystal bowls, which emit a "high, angelic vibration" that is used to clear the negative energy in the room. He would then move on to the Tibetan bowls, which are the healers. He explained that Tibetan bowls can be placed on and around your body and be played to return your body to a state of harmony. The harmonic tones of the bowls are apparently stronger than any pain that the body can hold onto. Austin interjected humor into the description of what the evening held for us so I didn't feel too much like I had somehow stumbled into the twilight zone. He then dimmed the lights and encouraged us to get into comfortable positions so we could let the bowls perform their magic. 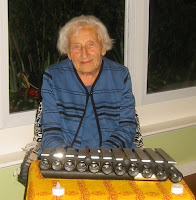 I'll admit to a healthy dose of skepticism, but I laid down on my mat and tried to open myself up for the experience. When Austin started playing, I can only describe the sounds as ethereal and shimmering. Austin primarily used cushioned mallets of different sizes to strike and stroke the bowls but he also used a bow (like what is used to play the violin) and his own voice. (I generally liked the chanting but when he "sang" in a low voice directly into a Tibetan bowl the sound was a bit creepy.) 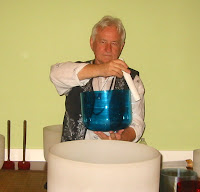 He also incorporated little cymbals and what looked to be Native American rainsticks (the sound of which was incredibly relaxing.) Mom Jennie periodically played her xylophone.

For the first few minutes, I kept peeking to see how he was creating this music. I then gave up on this and tried to just relax. It seemed like only a few minutes had passed when he told us that he was going to finish the concert with a "healing bowl ceremony." I felt physically unable to open my eyes so I can't report on what this involved.

Once most of the audience was back in an upright position, Austin asked for a guinea pig. Nobody put up their hand (probably because that would have required too much energy!) so he pointed to me and asked if I had any lingering discomfort in my body. I didn't want to admit that I hadn't been able to quiet the "monkey chatter" in my head, so I said that my shoulders were still tight. He came over with a large bowl and asked if he could put it on my head. (He commented that it would look pretty hilarious and that it was too bad nobody had an iPhone, at which point Bonnie whipped hers out to snap a couple of shots.) 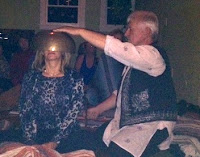 The bowl was very heavy, and he stroked it with a mallet and gently hit it a few times. I could feel the vibrations run through my entire body. Once he removed the bowl, he asked me if I felt better and I literally could not put a sentence together. My shoulders still felt a bit tight, but my mind had been emptied of all its noise. He did a couple of other demonstrations of using the bowls to alleviate pain and, with that, the evening was over.

It's hard to describe how relaxed and peaceful I felt the rest of the evening. It was the feeling you get when you have a really, really good massage and you slither off the massage table in a noodle-like state. You can check out a short performance by Austin on YouTube by googling "Robert Austin Crystal Bowl Sound Healer." (It has now been bookmarked as one of my favorites!) All I can say is that I left feeling that I had been on a magical, mystery tour. Not a bad way to feel going into the hectic holiday season!
at December 04, 2011