Each month a group from IYC heads out for a bike ride to a fun destination followed by lunch. I have to admit that I love being able to explore other areas on a route that someone else has already scoped out (although eventually I will have to step up to the plate and do some organizing myself!) This month's destination was Boca Grande on Gasparilla Island, a little slice of heaven with its beautiful beaches and blue waters.

Boca Grande is best known today for its big money tarpon fishing tournaments. Back in the late 19th century, though, phosphate was the name of the game, and its discovery in Charlotte Harbor led to the development of Gasparilla Island into a major deep water port and the construction of a railway system to transport supplies to the port and to move phosphate onto ocean going freighters. When the port went out of business in 1979, the need for the railroad no longer existed. Seeing an opportunity to enhance the town's amenities, the Gasparilla Island Conservation and Improvement Association converted the old railway bed into a bike path that is now shared by bikes and golf carts. 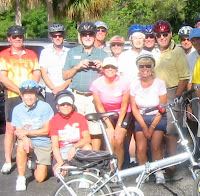 Thirty plus bikers (too many to get a good picture of!) gathered about three miles outside of town in a hotel parking lot to get organized for the ride. The only mishap of the day occurred when we discovered that the hotel had closed down since Murray, our trip leader, spoke with them the prior week, leaving us without "facilities" to use before the ride. Sometimes you just have to tough it out, though, so we saddled up and headed onto the bike path. Everyone ignored the route that Murray had planned which would have taken us down some of Boca Grande's little side streets and headed straight for Gasparilla Island State Park. 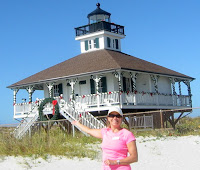 In addition to its beautiful beaches, Gasparilla Island State Park is home to a lighthouse that was constructed in 1890 with $35,000 of Congressionally-allocated funds. The lighthouse now houses a neat little museum where, for a nominal charge, you can read about the history of Boca Grande and check out some very cool old photos of the area. 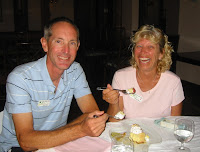 After enjoying some time on the beach, we headed off for lunch at the Pink Elephant. Cathy and Glen saved room for what looked to be a delicious key lime pie for dessert (and then showed some of the other bikers the way to the Loose Caboose for ice cream. They did not, however, double dip!) I'm not sure that the calories burnt on our 13 mile ride offset the calories from dessert, but who's counting on a beautiful December day in Southwest Florida???
at December 11, 2011