Meet Jake, the Newest Member of Our Family

I'll admit it--I thought my sister was crazy when she said that they were going to get a puppy. She had just sent her oldest child off to college, leaving her with "only" a 16-year old and a 9-year old at home. So far as I can tell, taking care of the kids and the household is a full time job. I can't figure out when she has any time for herself, much less time to tend to a puppy, which is essentially a baby without the diapers. Plus the last time we had a dog in the family was long ago and far away. 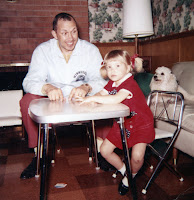 Yes, that is me affecting a blase attitude while my father tried to get me into the Christmas spirit. I was about four at the time. Beau-Beau, our dog, is in the background taking it all in. (For the record, I only recently learned that we didn't spell our dog's name "Bo-Bo." My mother informed me that this was because--drum roll--he was a French poodle!) Apres Beau-Beau, we've been a cat family. Cats, as you probably know, are much lower maintenance than dogs. Cats are independent. Cats can be left alone for days on end. Dogs, on the other hand, have to be walked and played with and you have to keep their needs and schedule in mind as you go about your daily life.

Suzanne ignored my advice, though, and Jake arrived in Florida on a plane from Iowa in mid-October (yes, like us, he is a mid-Westerner). He is a Cavachon, which is a mix of King Charles Spaniel and Bichon. Like Dougie, the dog in the movie "Up," Jake's approach to people is "I just met you but I love you!!!" And it's impossible not to love him back with his sparkling eyes, wagging tail and mischievous personality. 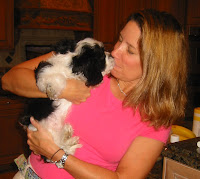 There of course have been some adventures since Jake joined the family. The biggest excitement was when he got into something he shouldn't have and became violently ill. Suzanne took him to the emergency room where he was given fluids via an IV. Suzanne and my mother had a quite hilarious "who's on first" conversation about this as Sue told Mom all about taking her "baby" to the hospital. They apparently had quite an animated discussion about whether or not the IV had been inserted into a vein. It wasn't until Suzanne said she wasn't sure that they would been able to find one under the fur that Mom realized they were talking about the puppy rather than Drew!

Like the doting aunt that I am, I could tell you all the truly adorable things about Jake, like how cute he is when he runs across the yard with his little legs scrambling or how excited he gets when he sees you after a long night's sleep, but that would be as bad as someone showing you home movies of their family vacation. What I will tell you, though, is that I'm glad Suzanne trusted her instincts that Jake would be a good addition to the family. Now the only question is what to get him for Christmas!
at November 28, 2011