After the devastation of Hurricane Charley, you'd think that Punta Goda residents would never want to hear the word "hurricane" again. In typical Punta Gorda style, though, the PG Chamber of Commerce turned the negative into a positive and organized a hurricane party last Thursday night. The concept was simple: enlist local restaurants to show off their stuff by sharing their version of the rum-based hurricane drink and a tropical appetizer to bearers of the official Hurricane Party wristband. Twelve restaurants and over 160 party-goers signed up for the event. I thought it sounded like a fun way to introduce my friend Andrea (just off the plane from New York) to Punta Gorda, so off we went, meeting up with Dorrit, Bruce and Murray along the way.

Overall, the event itself was a bit hit or miss. Some of the restaurants went to some lengths to make a positive impression on the hungry and thirsty participants. 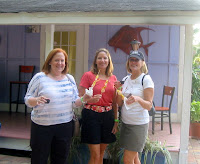 We particularly enjoyed the shrimp and pineapple skewers at Trabue, the shrimp poppers from Jack's and the less tropical but extremely tasty blue cheese and buffalo chicken wing quesadillas at Dean's South of the Border. Other restaurants were a bit less into it, with one place giving out teeny tiny little pieces of cheese with some pepper jam. (Really, why did they bother to sign up?)

River City Grill definitely won the prize for most generous drink, and their mussel shooters were a hit with our crowd.The nicest view award went hands down to the rooftop bar at the Wyvern Hotel (although there was some debate about whether the climate on Punta Gorda's local skyscraper--all five stories of it--was comfortable or chilly. I was accused of having lost all perspective on what constitutes cool weather, and I have to admit that's probably the case since I now want a wrap when it's 70 degrees!) 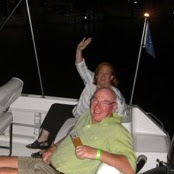 Andrea got a chance to check out Charlotte Harbor by going with Bruce and Murray by boat from downtown Punta Gorda to Harpoon Harry's at Fisherman's Village. Sure, it was only a ten minute trip, but at least she got the sensation of being on the water. All in all, another fun night out, and a good way to show Andrea some of Punta Gorda before getting down to the hard work of shopping for comforters, dishes and other decorating accessories to "Nanette-ize" my new digs. Luckily, Andrea is an HGTV addict, so I'm in good hands!
at November 05, 2011