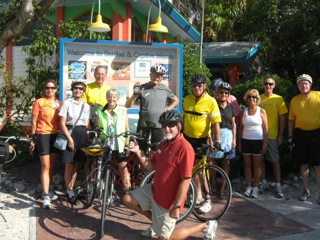 I was working in the learning lab this week and a student asked me the difference between an idiom and a cliche.  Stumped once again, I went to my trusty laptop to try and figure out a way to explain the difference.  Idioms are a group of words that, when read literally, don't mean what they say.  For instance, "She got up on the wrong side of the bed" is an idiom.  (It turns out that in days long past, it was considered bad luck to get out of the left side of the bed.  So, if you got up on the left--wrong--side of the bed, you were bound to have a grumpy day.)  Cliches, on the other hand, are terms that are overused (although you can understand what they mean without resorting to a reference book.)  One example of a cliche is, "Timing is everything."  Unfortunately, the timing of the IYC bike outing this week to the J.N. "Ding" Darling National Wildlife Refuge on Sanibel Island was just a bit off.

We made the trek to Sanibel on a gorgeous morning and gathered at the Sanibel Chamber of Commerce.  (Although the temperature was in the 60s, I still think that this sign outside the Chamber is perhaps a bit tongue in cheek!)   We rode from there to the Refuge and headed inside the Museum for a tour and a presentation.  What an interesting place!  As you enter the Museum, there is a computer with an "e-bird tracker" on which visitors can enter a record of the birds that they've seen.   For serious birders, I can only imagine that this is a fabulous resource.  We were then escorted into a small auditorium where a gentleman gave us an overview of the Refuge and told us about some of the birds that come to the Refuge.  The story of the Red Knot was truly amazing.  Red Knots fly from the Arctic Circle to the Refuge in Sanibel WITHOUT STOPPING!  The birds lose approximately 50% of their body weight during this journey, and spend three weeks at the Refuge fortifying themselves before continuing their trip to the southern tip of Argentina.   During the course of this 10,000 mile migration, they fly between 400 and 500 miles a day.  (And my arms feel like they are falling off after a four minute song in my body pump class!)  Sadly, the Red Knots arrive at the Refuge a bit later in October, so we missed their migration. 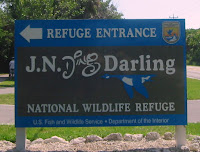 We learned a little bit about "Ding" Darling as well.  Ding was a Pulitzer Prize-winning political cartoonist and avid conservationist.  Notwithstanding the fact that he lampooned the policies of FDR, FDR appointed him as director of the predecessor to what is now the US Fish and Wildlife Service.  In the 1940s, Darling learned that the State of Florida was intending to sell off 2200 acres of Sanibel's mangrove wetlands for 50 cents an acre.   Darling interceded and leased the land, creating the basis for what is now the Ding Darling Wildlife Refuge. 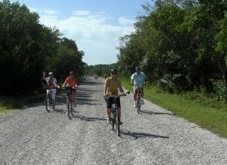 There was lots to see at the Museum, but we needed to head out if we were to have any hope of seeing birds lingering for a late breakfast in the mudflats.   We rode over a one way gravel road that winds through the preserve, peering into the wetlands to check for birds.  (I see from this picture that we somehow ended up riding in a "V" formation much like migrating birds!)  We did spy a Roseate Spoonbill flying overhead, but that was about as exciting as it got.  I suspect if we had been there a few hours earlier, we would have seen a nice assortment of the over 220 species of birds that reside in the refuge.    Leaving our homes well before the sun rose was not, however, in the plan.

At the end of the outing, I'd had a nice ride (clocking around 17 miles) and some good conversation with friends, enjoyed a delicious lunch at Doc Ford's restaurant, and found a great place to explore in the future.    All in all, another day well spent!
at October 07, 2011