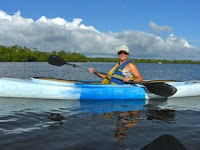 Several lifetimes ago, I worked as a summer intern in Washington for Senator Paula Hawkins (R-Florida).  (The "R" is one clue that this was long ago and far away!)   One of her legislative assistants was a guy from Fort Myers who swore that Sanibel Island is the most beautiful place in the world.   Despite the fact that Punta Gorda is only about an hour away from the Island, I hadn't made my way there until I went with Dorrit and Bruce on a Groupon Coupon kayak outing earlier this week.  I will definitely be back!

First, a word about the modern day phenomenon that is Groupon.  Like many people, I was first introduced to Groupon by what has to have been the most politically incorrect Superbowl ad of all times.  Nonetheless, I'm a subscriber, and I quite enjoy getting my daily offers, even when the deal is something I'm not the least bit interested in. Groupon prides itself not only on its deals, but on its "signature write-ups" of the offers. One Groupon employee called them "absurdist poetry" in a recent Vanity Fair article.  Here's the lead-in for the kayak deal:

"As with the lycanthrope and the centaur, two ancient beast/man hybrids, the word "kayak" comes from the Greek word meaning "half man, half boat." Unleash your aquatic side with today's Groupon at Tarpon Bay Explorers on Sanibel Island."

Really, how could we resist that pitch, especially when it was only $13 for two hours of kayaking? 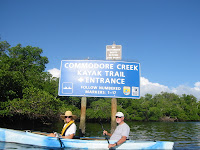 We arrived at the Tarpon Bay Explorers around 9:00 after negotiating almost bumper to bumper traffic in Fort Myers, which we definitively decided we did not miss in the least.  We were fitted with our kayaks--a double for Bruce and Dorrit and a single for me--and headed out into Commodore Creek Mangrove Trail.  The creek has 17 markers (sort of like cookie crumbs in case you get turned around) as you weave your way through the mangroves before reaching an open bay area.  There are lots of opportunities for viewing birds since the water is very shallow.   As always, the herons were a personal favorite.  The fish were going crazy that day and were jumping all around our kayaks, at some points leaping at least three feet into the air.  It makes me smile every time!

Being one with nature gives you the opportunity to contemplate deep thoughts.  We continued a conversation that we had started a few days earlier, "If you had superhero powers and could either be invisible or fly, which would you choose?"  As you imagine, this is not a choice that you want to make lightly!   (For the record, I opted for having the ability to fly.) 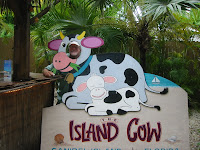 Since, as we know, I make it a priority to offset any benefits of exercise by eating as soon thereafter as possible, we found a great spot to have lunch after we got off the water--the Island Cow.  In addition to being a really cute spot and having delicious food (Dorrit and I shared crunchy grouper tacos), there was a great photo opp that Bruce, good sport that he is, agreed to pose for.  (At that point, he was wishing that he in fact was a superhero with the power to be invisible.  Just one of the hazards of hanging out with me!)

We capped off our day with a walk on one of the local beaches.  The tide was so high that the beach was almost nonexistent in parts so we walked through the surf.  There was a nice breeze, which the royal terns turned their bodies into to enjoy.  Altogether, another highly enjoyable day in Punta Gorda and its environs.
at October 01, 2011