The Isles Yacht Club has so many different groups doing fun things that it is virtually impossible to participate in them all.  All women members of the Club are automatically members of the Isle-Ettes.  Unlike most of the groups, the Isle-Ettes don't have one particular "mission"; they just have programs and outings they think will be of interest.  For one reason or another, I haven't been able to make it to many of the Isle-Ette's meetings, but I made it a priority to get to this month's meeting, which featured a cooking demonstration by Chef Philip with a fun twist. 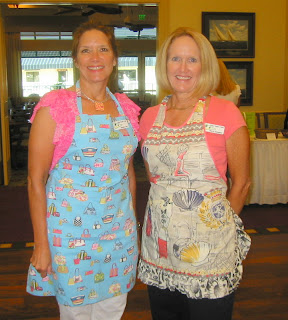 The announcement of the meeting invited us to wear an apron (and noted that there would be a competition.)  I don't typically sport an apron while I cook, but my friend Pam happened to make one for me this summer (how's that for prescience???) so I was ready to go.   The cooking demo started after a long list of announcements of future Islet-Ettes events.  These women are busy!   Upcoming outings include trips to the Dali Museum  and a production of Carmen put on by the Sarasota Opera.  If you don't feel like traveling, you can join them for a fashion show and there might also be a reprise of a self-defense class that got a good response over the summer.  Fun!!!

To determine the winner of the apron competition, an entrant was chosen from each table.  Shockingly, neither Dorrit nor I were selected from our table (hello--take a look at those cute aprons!) but that worked out just as well since we were front and center for the cooking demo.  Carol Nuzzo wore the winning apron and her prize was to man (or would it be "woman"?) the second cooking station.  Carol is great fun and has the absolutely most expressive face so she was a perfect choice. 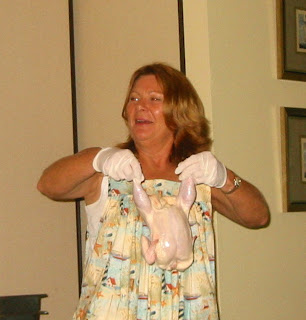 The luncheon menu was roasted chicken with glace de poulet and a roasted peach and vidalia onion salad.  Chef Philip started off his demonstration by showing us how to cut up a whole chicken.   It reminded me of a quick fire challenge on Top Chef (one of my favorite shows.)   I have to say that I was pretty darn happy at this point that I was in the audience rather than in the spotlight!  He went over some knife skills and showed us how easy it is to cut the chicken up if you just cut through the joints.   Once the chicken was in pieces, the breast was put on the stove to cook (skin side down so it would turn out nice and crispy.)  (FYI, the chicken is typically done in the oven, but with no oven available for the demo, Chef Philip decided to give it a go in the saute pan.)  Carrots, celery and onion (a "mire poix") went into the stock pot along with the chicken carcass and enough liquid to cover the chicken and the veggies.

With the chicken and stock underway, Carol and Chef Philip turned to the salad.   As always, the trick to a great salad is fresh ingredients.  Georgia peaches are the best for this recipe (you want them to be firm for roasting) and a Vidalia or other sweet onion is a must. To roast the peaches, all you do is halve them and take the pits out.  Leave the brown "stuff" since that's all sugar!  Cook them at 400 degrees for about 20 minutes.  Once the peaches are done, you slice them nice and thin and toss them with slivers of the sweet onion, some grape tomatoes, celery and a bunch of cilantro.  The dressing was just some lemon and EVOO to bring out the freshness. 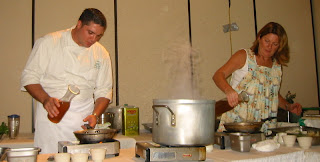 Once the salad was ready to go, Chef and Carol turned back to the stock to make the glace.  (As you can see, they worked in perfect synchronization.)  Of course, to make stock takes longer than we had for the demonstration, so there were a couple of carafes of pre-made stock at the ready.  The glace was basically reduced stock, butter, thyme, salt and pepper.  I loved the fact that Chef Phlip didn't get fussed if things didn't go quite right during the demo.  The heat on one of the portable cooktops kept flickering on and off and made if difficult to make the sauce without it "breaking."  He took it all in stride--after all, the sauce that we would actually be served was safely being done in the kitchen away from our prying eyes!

With the demo behind us, we were treated to our lunch, and it was delicious.  The chicken was moist, the skin was crispy, the sauce was delicious and the salad was a great accompaniment with its unexpected flavors.  We ended our lunch with cake to celebrate the Isle-Ette's 35th birthday.   All in all, quite an enjoyable (if fattening!) meeting.
at September 17, 2011