Shakespeare by the Sea Presents The Comedy of Errors 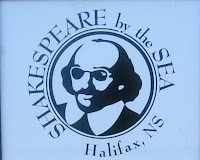 Chester's environs are just full of little gems if you take the time to seek them out.    Having enjoyed the outdoor production of Beowulf so much, I was keen to check out Halifax' own outdoor theater, Shakespeare by the Sea.   The bar had been set a bit higher for this production than for some of the other shows I've seen this summer, both because Beowulf was so terrific and because I've had the opportunity to see Shakespeare performed outdoors in the past.   Years ago when I was living in New York, I went to a couple of shows at Shakespeare in the Park put on by Joseph Papp's Public Theater.  Since the cast of these productions often include big names and the shows are put on by, well, Joseph Papp, they are pretty spectacular.   Then there was Shakespeare & Company in Lenox, Massachusetts.  While it was a larger and more permanent venue, I remember the experience as being quite special. 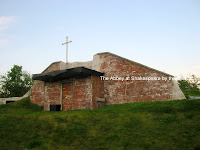 Cut to the Cambridge Battery at Point Pleasant Park in Halifax.  For those of you with a historical bent, Cornwallis founded Halifax in 1749 as a strategic settlement for the British.  Seven "batteries" (fortifications) were established in order to protect the harbour from enemy ships and Cambridge Battery was one of these fortifications.  Cambrige Battery is now the home to Shakespeare by the Sea, and I can only imagine that the actors occasionally channel some of the history of this place when performing Willy the Shake's darker plays.   No such channeling would have been required for the production of The Comedy of Errors, though, Shakespeare's first comedy and one of his earliest plays.

The theater is located about a ten minute walk into the Park and we arrived just in the nick of time for the performance, armed with chairs, blankets and fleece jackets.  We set up our chairs and joined the ranks of what I'd estimate to be a crowd of 100 or so theatergoers.   Despite my good intentions, I hadn't read anything about the play and we didn't have time to read the program, so I was a bit apprehensive as the show started.  After all, it can sometimes be a bit hard to figure out what the heck is going on in Shakespeare.   I realized I didn't need to worry too much when the opening scene was overseen by a would-be executioner wearing sunglasses and sporting a farmer's tan!  The potential executionee was a gentleman who told a sad tale of two sets of twins separated at birth (Antipholus and Dromio of Ephesus and Syracuse, respectively) and his search for one of his sons.  The Duke took pity on the man and granted him a day long reprieve if he could come up with the cash to buy his freedom.   This was the set-up for a day of confusion and hilarity as Antipholus and Dromio of Syracuse visit the village and are confused with Antipholus and Dromio of Ephesus (or was it the other way around???)

Despite the executioner's get up, the play was done straight up for the most part (or at least as straight up as a farce can be done!)  The director did include some unexpected updates that added an extra level of fun to the performance.  My particular favorite was when one of the Anitopholuses (Antipholi?) was trying to escape from a lunch with the wife of the other Antipholus and sneak away--back to the wall, rolling on the ground as necessary--humming the theme song to "Mission Impossible!"

I found the acting quite good, with particular kudos to Carly Chamberlain, who played Adriana, wife of Antipholus of Ephesus, and Tom Gordon Smith, who played Antipholus of Syracuse.   Both of the actors who played Dromio were great as well, and they looked so much alike that I thought at first they were the same actor.  (The way that you could distinguish one Antipholus from the other was that the colors on their shirts were reversed (brown on one side, white on the other); for the Dromios, it was which sleeve on their sweaters hung down below their hand.)   As with Two Planks and a Passion, it was great fun to be so close to the actors.  This shot was taken during intermission as the actors relaxed at picnic tables behind the audience.  I wasn't brave enough to ask for a real photo opp but suspect that they would have been more than willing to accommodate.

While The Comedy of Errors wasn't my favorite theater experience of the summer, it was definitely a fun night out and well worth the $15 voluntary contribution.   The great thing is that you don't have to choose between going to the Chester Playhouse or Two Planks and a Passion or Shakespeare by the Sea.  They are all readily accessible and just waiting for theatergoers to enjoy their offerings.   If I weren't heading back to Florida this week, I'd check out one of Shakespeare by the Sea's other productions this season--Measure for Measure and Robin Hood (I guess they branch out a bit beyond Shakespeare, which is probably smart marketing).    The bottom line is that if you find yourself in Nova Scotia, get thee not to a nunnery, but to some of the excellent theater that is being put on in this magical province!