After enjoying ladies' day golf for the past few years at the beautiful Chester Golf Club, I decided it was time to do my bit and be the Member Host  for the month of July.  (This is the genesis of  the "Miss July" moniker, although no self-respecting beauty queen would have a baseball cap permanently affixed to her head as I seem to!)  All I had to do was organize four tournaments, so how hard could it be?  Little did I know!  It was actually a lot of fun and allowed me to put names with faces while using my organizational skills and creativity.  And since I've declared this summer to be "all about the golf," it fit perfectly with my mantra. 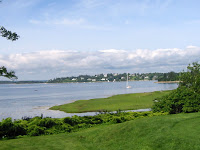 First a word about the golf course, which has to be one of the most beautiful in the world.  It's gorgeous whether the sun is shining or the fog has rolled in.  The course has water views from over half of the holes, which can be a bit distracting!  Some ospreys have made their home on a pole by the first green, and each year we watch the growth of the baby birds and celebrate when they leave the nest for the first time.  My recollection is that the Pew Charitable Trust donated the land for the course to the municipality with the intention of making the course affordable to all municipal residents.  (Annual membership is about $500 and there's no minimum so it is really one of the best deals you could possibly find!)   It's not a long course (which certainly suits my game) but the greens more than make up for it and the greenskeepers are quite devilish with their pin placements!

My responsibilities for the month were to determine the format for each Tuesday, organize the pairings, and tally the scores.  There's a luncheon on the last Tuesday of the month at which prizes are awarded and the Member Host happily turns the reigns over to the next month's czarina.   My first Tuesday went swimmingly, with 50 ladies signed up.  The weather was great, people enjoyed the "various pars" format, and everyone was happy.   The second Tuesday was a different story altogether.  Two tournaments were being played--the Nunn Trophy for players with a handicap of 37 or higher and the Bronze Trophy which would determine the five players going to represent Chester Golf Club in a province-wide tournament in August.  Forty-four players had signed up and the panic set in when I woke up to rain and a forecast for thunderstorms throughout the day.   I spent my morning in the pro shop scratching people's names off the list as the cancellations flowed in.  Only ten women ended up playing that day (and I have to admit that I was not one of them!)   The Executive decided that we would replay the tournaments the following week, with the players who went out in the rain having two bites at the apple.   We decided that we would also play the regularly scheduled format day--the tombstone tournament--because it is a favorite.

Happily, the weather cooperated the following week and we got the tournaments played.  The Tombstone Tourney is always a fun one.  You add your handicap to par for the course and if you reach that number of strokes during the round, you "die."  The Club provides tombstones and crosses that you can put your name on and plant in the event of your death and there's a competition for players who design their own.   Some people are quite clever and elaborate with their designs.  The only year I made my own I went with an urn for my ashes.  I was stunned (not) when I didn't win the prize for creativity!

The final Tuesday of the month is always a team format, and I introduced the concept of team best ball last year.  The team score on each hole is the best net score on that hole of the team members.   It's a bit of an exercise to determine how many strokes each player gets per hole, but it's a format that allows higher handicappers to participate in the team score when they have a good hole.   Plus people get to play their own ball, which is always a plus.  The rain held out until we had four holes to go and then the skies opened up.  It's a shotgun format and some of the players who were close to the clubhouse bailed and went in for an early lunch.  My team continued on and ended up winning with a net score of 55!   After a great lunch and the awards "ceremony," my job was done.  Whew! 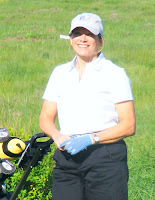 I thoroughly enjoyed my tenure as Member Host but have to admit that I'm happy to go back to the ranks of the mere players.   I have a little over three weeks left before I head back to Florida and am hoping to break 100 for the second time ever before I leave.  (The day I broke 100 was a fun round, only to be followed up with a couple of truly ugly rounds.  The golf gods giveth and they taketh away!)    I have the golf bug pretty bad now, so I might have to break down and play over the winter.   Too many fun things to do, too little time!