For the past few years, I've wanted to check out Kejimkujik National Park (which is thankfully referred to as "Keji" for short) but have never quite gotten there.   The Park has two locations--the national park proper, which is located in the center of several canoe routes between the Bay of Fundy and the coast of the Atlantic Ocean that were used in bygone days by local indians, and the seaside adjunct park.  The Park proper is both a National Park and  a National Historic Site and looks more than worthy of a day of exploration.  Visitors can engage in all sorts of outdoor activities there, from biking and hiking to kayaking and birdwatching.  In addition, the Park boasts some petroglyphs that were created by the Mi'kmaq Indians in the 18th and 19th centuries and look quite cool.  The property for the Seaside Adjunct Park was added to the Park in 1988 and is one of the least disturbed coastal properties on the southern coast of Nova Scotia.  The idea of hiking along the water sounded quite enticing so visiting the Seaside Adjunct was a higher priority than going to the park proper. Last week I finally got there with my friends Pam and Johanna, and what a beautiful spot it is!

There were no cars in the parking lot when we arrived at "Keji" and no ranger on duty at the guard house, which was a bit curious.  We had decided to go with the longer 9K walk and walked to the trailhead (maybe ten minutes at the most) when we came upon signs saying that the trail was closed "for maintenance."   Now, I am the quintessential rules girl and generally color inside the lines but I wasn't about to turn around and go home because of some silly trail maintenance signs!  What kind of maintenance could we be talking about?   I easily persuaded Pam and Johanna that we could turn back if it looked dicey so we ducked under the saw horse and headed out. 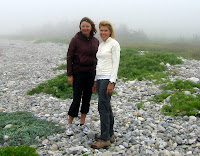 The first bit of the hike is down a boardwalk which, as advertised, was torn up in places.  Not an issue for us but (donning my legal hat for a moment) I could understand why the Park wouldn't want kids to run headlong towards the beach and get tripped up.    Eventually we made our way onto a rock strewn path that had lots of sea urchin remains.   The fog had rolled in and we were quite happy that we'd had the foresight to pack jackets.  It was very pretty and quite atmospheric, and I was convincing myself that it didn't matter if it wasn't sunny because the scenery was nice just as it was when the sun broke through the clouds.  I have to tell you, with the sun shining, the park was downright glorious! 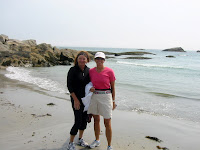 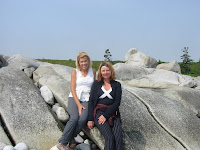 By this time we had made our way from the rocks onto a beautiful white sand beach.   The water was gorgeous and it was somewhat reminiscent of the Caribbean--but for the water temperatures!  As we walked we could hear the waves crashing onto the shore--one of my favorite sounds in the world. From the beach we could see a small island where a few seals were sunning themselves and we watched for a while as other swam frolicked in the Ocean.  There were some great rock outcroppings that reminded me a bit of Peggy's Cove (a must see if you are ever on the South Shore of Nova Scotia).

The park has some interesting vegetation that Pam and Johanna pointed out along the way.  The most unusual was the pitcher plant (which I took a very out of focus picture of so I can't include it here--sorry!)  It is quite striking and carnivorous, sort of like a venus fly trap.  I would have loved to have seen one in action!
After our walk, we headed down the highway to Shelburne to have lunch at Charlotte Lane.  (In case you haven't noticed, I think it's important to counteract any benefits of exercise with food as soon as possible after my work-out is over!)   Charlotte Lane is a sweet little restaurant with eight tables inside and a few tables on the patio.  The staff was dressed up in 18th century Loyalist attire in honor of the Founders' Day celebration that was going on and music wafted up from the waterfront to accompany our meal.  We had a great lunch and capped it off with a fabulous lemon panna cotta with raspberry sauce that I'm hoping to replicate.   All in all, another great day spent with good friends in the great outdoors!