Have Camera, Will Shoot

Jay is the photographer in the family.  He actually used to take pictures professionally, so needless to say his standards are significantly higher than mine.  In the days of film, he would go through an entire roll and save one or two pictures--if he was lucky and feelng in a generous mood!  Anyway, digital cameras do make it a bit easier, and I love carrying my clumsy point and shoot with me on my outings.  Here are a couple of shots that I  wanted to share.

This is a fun one from a bike ride along the Aspotogan Peninsula.   The water lilies are just about to bloom.  Water lilies of course remind me of Monet, which reminds me in turn of when my sister and I visited his home in Giverny.  On our way back to Paris, we realized that we were on a train going the wrong direction and ended up having to make a jump for the platform.  Suzanne leapt off and landed gracefully like the ballerina she was.  Me, not so much!   Just one of those memories that will be part of the Crist family lore forever. 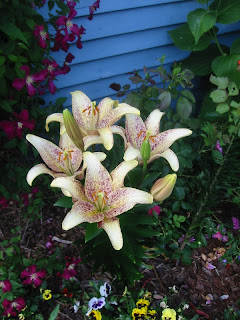 People in Nova Scotia are really into their gardens, and my friends Pam and Peter's gardens are some of the most beautiful I've seen. In addition to the gardens, the backyard sports a trellised pergola where they were married!  Pam and Peter are quite the hosts and had our gang over recently for a wonderful dinner. We had appetizers and cocktails down on the dock overlooking the LaHave River and moved up to the screened in dining room for dinner (which ended with homemade vanilla ice cream that was truly to die for). Anyway, these lilies--while not the most exotic flowers in the garden--really pop against the backdrop of the blue house and practically screamed out to have their picture taken.   Who was I to refuse? 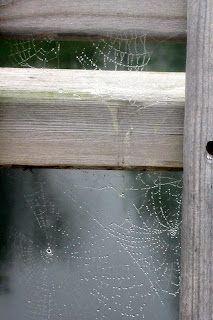 Back to a more evocative shot.  Hopefully the resolution is good enough that you can make out the spider web attached to this post.  I came upon this photo opp one day on a walk on the Rails to Trails from Martin's Point to Mahone Bay.  It was about a 6 mile walk (and the leaders kept up quite the pace) so I didn't feel the least bit guilty enjoying a life sustaining muffin from the Biscuit Eater Cafe.    Life--or at least my time in Chester--is just too short to count calories!
at July 21, 2011