June is the traditional time for weddings or, as they say, "to tie the knot."   What does that expression mean, anyway?  I started wondering about it when I signed up to attend a session of the Admirals Club at the Isles Yacht Club on, you guessed it, tying knots.  Having done a bit of research, there doesn't appear to be a definitive answer as to the genesis of this idiom.  The most painful suggested provenance was the practice in the days of the Roman Empire for brides to wear girdles that were tied in knots.  In order to consummate the marriage, the knots had to be untied so I guess you "tied the knot" in anticipation of the marriage.  Another possibility is that the expression refers to the tradition in certain Japanese marriage ceremonies of tying the couple's hands together with a rope in order to bind them together.  Less painful than the girdle but still not so convenient.  In the Hindu culture, the bride and groom tie knots of flowers together and place them around the other's neck to indicate that they are ready to consummate the marriage.  At least now we're in the realm of the romantic.  My favorite possible source of this idiom, though, is the practice of lovelorn sailors to propose to their sweethearts by sending them a rope through the mail. If the woman accepted the proposal, she would tie a knot in the rope and send it back to the anxiously awaiting seaman.   If she didn't accept the proposal, well, they don't go into that.

Now that that that's been cleared up (or not), we can move to the Admirals Club meeting that led to these ruminations.  The Admirals are a group of women who get together every other month to discuss practical issues relating to boating.  The topics range from safety issues to quick and easy recipes to boat handling.  This week we got a primer on dealing with ropes (which, when taken aboard a boat, magically become "lines"). 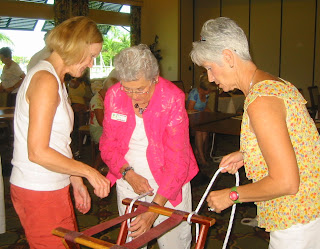 Each "Admiral" arrived at the "SS IYC" with a 6' + piece of line, as instructed.  After a quick overview, we started our hands on experience with a knot that is made from a clove hitch and two half hitches. As you can see from the action-packed picture, with no pilings or posts in proximity, we tied our lines up to chairs, table legs and pretty much anything else that was stationary.  Once everyone had more or (in my case) less mastered this knot, we moved on to the bowline.  Before I go further,  I have to tell you that I have difficulty understanding nautical terms.  I thought for quite some time that people were referring to the "love curve" of the sail rather than "luff curve."  (Perhaps that should have been my first clue that sailing doesn't come naturally to me!)  On this occasion, I was surprised to learn that what I had thought was the Boleyn knot (as in Anne, which would make sense since the bowline is called the "king of knots") was spelled "bowline."   Why it's not pronounced with a long "i" is beyond me, but it's not.  Anyway, this knot is one that I've worked with before, and I did catch on after a couple of tries.  The easy way to remember it is that "the rabbit comes out of the hole, goes behind the tree and goes back into the hole."  (See how simple that is??? Trust me, it actually does work!)  At this point, we were getting short on time, the collective aptitude of the Admirals not being quite what had been anticipated.   After spending a few minutes talking about strategies and the associated knots for tying up to a dock, we adjourned for lunch.  As you can imagine, after tying ourselves up in knots for 90 minutes, we had worked up quite an appetite.
at June 03, 2011