Cooking Up a Storm with Chef J 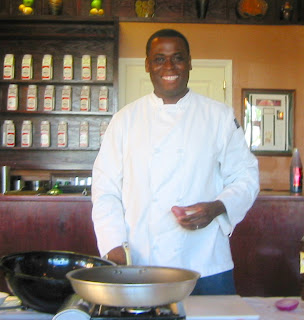 If you watched the commercials during this year's Superbowl, you might remember an incredibly politically incorrect ad for Groupon that featured Timothy Hutton.   (This might actually be advertising at its most clever because it has stuck with me since then.)  Groupon negotiates discounts with businesses and then advertises those discounts to people who've registered to receive notices of deals in their area.  My friend Dorrit first discovered Chef J when she received an e-mail with a Groupon coupon for a cooking class at Chef J's Bistro and Cooking Studio in Cape Coral.  It sounded like a fun birthday present for a friend and off they went to a class on Spanish cuisine.  They had a great time so we decided to check out his class on French cooking this week.   For $35, you get the class and dinner, so what did we have to lose?

Chef J is a real charmer.  He's from the Cayman Islands so he has that laid back Caribbean air about him--the perfect personality to make cooking something challenging feel accessible.  He's also an instructor at the Business and Entrepreneurial Academy at the Oasis Charter High School, so he knows how to teach as well as cook.

We started off our evening learning how to prepare a great appetizer to serve in the hot summer months--cucumber provencale with French goat cheese and roasted red peppers.  Since you eat first with your eyes, presentation is important and he shared a great secret with us--balsamic glaze in a squirt bottle.   The plating converted this light, easy and delicious appetizer into something really impressive for your guests.  I have to say that cucumbers are one of the two or three foods that I have an aversion to, and even I really enjoyed it!

We then moved on to a delicious papaya salad.  Again, the idea was something light but full of unexpected flavors.   The first surprise was that he used iceberg lettuce for this dish, which seemed very unsophisticated with the more exotic greens that we are used to seeing these days.  There was a method to his madness, though--iceberg lettuce provides crunch and coolness without the flavor that other lettuces have so it supports the salad while letting the other ingredients be the stars.  Who knew?   Ultimately, the salad included papaya, toasted almond slivers, cherry tomatoes, asiago cheese, red onion and cucumber (which he kindly left off my plate since I had now shared my distaste with him).  The real star of the dish was the dressing, though--an extraordinary vinaigrette that took this salad to a different level.   While making the dressing, Chef J shared a secret with his students--you need to whisk the vinegar for three to five minutes to make sure it's warm before you add the oil to it.  When the vinegar is warm, it combines beautifully with the oil and develops a nice consistency rather than separating.  He also uses salad oil rather than olive oil to keep the dressing light.   Truly delicious. 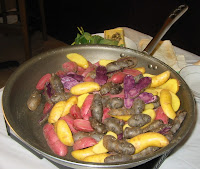 We were now ready for the main course--sauteed chicken breast with an orange truffle beurre blanc and garlic basil fingerling potatoes.   Rest assured that any dietary credit that we might have gotten for eating light in our first two courses was wiped away with this sauce, which included almost a pound of butter for the 14 of us plus some heavy cream.   The potatoes were beautiful with their different colors and the smell of fresh basil wafting from the plate made them irresistible.   The chicken breasts were incredibly juicy after having been browned in a skillet and then baked until cooked through.  Chef J poured wine over the chicken before putting it in the oven to keep it moist, another great tip to file away.   The sauce was the star of this dish, though, and was truly to die for.  (Just ask our arteries!)  The combination of fresh orange juice, white truffle oil, butter, cream and garlic was a knock out, and would be great on a white fish as well as chicken.

Chef J knew that his students would be too full for dessert (although I could have used a taste of sorbet or a square of chocolate to round out the meal.)    Three hours after we arrived, we waddled out of the restaurant, having had a great dinner and an evening of entertainment.  Plus we have new recipes to try out on our friends and family.   During the class, we were studying the schedule of classes to figure out what we should try next.  Caribbean cuisine?  Seafood with an Asian flair?  Hawaiian night?   (You can check it out yourself at http://www.chefjcatering.com/.)    Whatever we decide, you can be sure that you'll read about it here.  Now I think it's time to head to the gym to work off some of that beurre blanc sauce!
at June 16, 2011