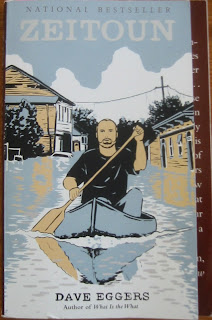 As Louisiana and other southern states deal with the aftermath of the flooding of the Mississippi River, it seemed like an apt time to write about Zeitoun by Dave Eggers. Zeitoun is the story of one Muslim family’s experiences in New Orleans before and after Hurricane Katrina, and it is very eye opening.

Abdulrashman Zeitoun grew up in Syria. He made his living working on fishing boats and freighters. In 1988 Zeitoun came to the United States on a tanker carrying oil from Saudi Arabia to Houston.  He eventually ended up in Baton Rouge, where he met and married his wife Kathy, a convert to Islam. When the story opens, Abdulrashman and his wife Kathy are fielding calls for Zeitoun A. Painting Contractor, a family-run house painting business that has expanded into property management. On this August day, some of their more cautious customers are making preparations for Hurricane Katrina. As the day develops and the storm continues to be upgraded, Zeitoun continues to help his customers prepare for the storm while he debates with Kathy whether they should stay or evacuate. Eventually a decision is made that Kathy will take their four children and head to Baton Rouge while Zeitoun will weather out the storm in New Orleans, giving him the opportunity to watch over their own properties and their customers’ homes.

As we all know, Hurricane Katrina turned out to be anything but a benign storm. The book tells the story of homes being destroyed as the levees break and of Zeitoun’s rescue of people in need with a canoe that he purchased on a lark a few years back.  When he saw it, he thought, "It seemed to speak of exploration, of escape."  Little did he know.  This part of Zeitoun's story is interesting, but nothing that we haven't heard about before.  Just when I was thinking, "Why are they writing about this guy's story?", things got very interesting.

On September 6th, a week after the hurricane made landfall, Zeitoun and three friends were in one of Zeitoun's properties when five men and one woman wearing policy and military uniforms with guns came to the door and forcibly put them on their boat.  Zeitoun assumed that they were being moved since they had ignored the mandatory evacuation order. It quickly became apparent that this was not the motivation when they reached their destination and Zietoun was tackled and handcuffed as he stepped off the boat.  Zietoun and the others were being held as suspected looters and terrorists.

The men were held at the New Orleans Union Passenger Terminal, which had been converted from a train and bus depot into a jail.   (They later learned that the jail had been build by prisoners shipped in from Dixon Correctional Institute and Louisiana State Penitentiary and that it was referred to as "Camp Greyhound".)   Zeitoun became increasingly upset as he heard passing soldiers call them "al Qaeda" and "Taliban."  They were processed and strip searched before being moved to the parking lot, which had been transformed into an outdoor prison.  Zeitoun shared a cell approximately 15' x 15' with his friends.  It was empty but for a portable toilet without a door.  The men had to sleep on the ground and eat whatever was given to them.  They were denied their right to make a phone call. Zeitoun and Nasser, another Muslim who was picked up at the same time, continued praying five times a day as required by their faith.  They were looked upon with suspicion for doing so.   The prison was patrolled by soldiers with dogs, and the men were concerned that an Abu Ghraib situation would come to pass. Prisoners who did not do as they were told were pepper sprayed from head to toe as the other prisoners watched.   Zeitoun realized that watching his fellow prisoners being treated this way was a calculated move.  "It diminished the humanity of them all."

Three days later, Zeitoun was moved to the Elayn Hunt Correctional Center, a maximum security prison.  He was processed again and put in a cement cell with a bed with a rubber mattress.   Zeitoun continued to ask for a phone call but was told that this was up to FEMA because FEMA was renting the prison space from the Correctional Center.  (After 9/11 FEMA was folded into the Department of Homeland Security and, as such, had broad powers after a national emergency such as Katrina.)  Zeitoun originally shared the cell with only Nasser, but other men joined them over time.   One man was a sanitation worker from Houston whose company had been contracted to help with the clean-up.  He was walking to his truck one morning when he was picked up by the National Guard for unknown reasons.   They were all doing "Katrina time."

Eventually, though a complicated series of events, Zeitoun was able to get in touch with his wife who found a lawyer to work on his release.   He was charged with petty theft and bail was set at $75,000.  On September 29th, after 23 days of incarceration, Zeitoun was released.  He was never tried for his alleged crime.

I cannot find the words to provide any commentary on the story that is told in this book. It is an indictment of yet another aspect of the way that the post-Katrina situation was handled.  I can only hope that similar situations are not taking place in the states that have been devastated by the flooding of the Mississippi River and ravaged by tornadoes.

The Zeitouns set up the Zeitoun Foundation in 2009 to aid in the rebuilding of New Orleans.  All proceeds from the sale of this book go to the Foundation.
at May 23, 2011