In this day and age of the iPhone and the iPad, information is always at the ready.   There's no doubt in my mind that this makes us a bit intellectually lazy--why bother to actually learn and retain information when you can just look it up????   This makes the Isles Yacht Club's monthly trivia nights all the more fun.

When we first moved to Punta Gorda last year, I was amazed at the range of activities that the Yacht Club has to offer.  Boating, biking, kayaking, golf, bridge, billiards, book club--you name it, they've got it.  Over the past year, I've been impressed with the creative ways that they bring people into the Club for an evening of food and fun.  The Club recently had a night of "dining with the dogs" on the patio and 43 dogs were in attendance!  (It sounded to me like a disaster waiting to happen, but it apparently went very well and another evening is in the works.)  Anyway, I've been invited to join a table for a couple of the trivia nights and it is truly a blast. 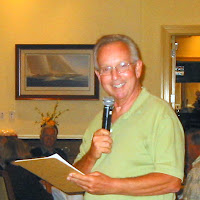 The evenings are hosted by Trivia Master extraordinaire Rich Tilden.   He does a fantastic job.  The questions are purchased from some website--I don't know all the specifics--and Rich is in charge of posing the questions and corralling a dining room full of eager participants.  His only rule is "The Trivia Master is always right!"  Keeping the evening flowing while keeping the participants entertained is no mean feat.  The fact that Rich knows many of the audience members helps as he teases people in an amusing but never denigrating way.  I learned last night that Rich was a DJ in a former life--that makes his ability to keep up an interesting patter much more understandable!

The format of the evening is pretty simple.  Each table is a team and their first task is to come up with a team name.  Our name last night was the Magnificent Seven.  (We wanted to emphasize the fact that we were a player short so that everyone would be amazed at our strong performance.)  There are six rounds of three questions each.  Rich gives the categories of each question in advance so that you can make a determination as to the points that you want to allocate to your answer.  In the first half, you have to choose between 1, 3 and 5 points per question and in the second half you choose between 2, 4 and 6 points per answer.  So, there is a bit of strategy involved--how confident do you feel in your answer to the first question in the round?  And how confident do you feel that you will be able to answer a question from the second and third categories in the round?

The first question is supposed to be a relatively easy one and all you have to decide is whether it's true or false.  So you have a 50% chance of getting it right.  The statement last night was something like "True or False--Fillies in the Kentucky Derby carry lighter loads than colts."   After much analysis, we decided to answer "false" and cockily allocated five points to the answer.  WRONG!!!!    Oops--not a good start.

Over the course of the evening, we had questions on topics ranging from cars to geography to movies.   Do you remember the "Cash for Clunkers" program?  Which of these four types of car was the most frequently cashed in--Mustang, Explorer, Expedition, Focus.   Within +/- 400 miles, how long is the Mississippi River?   What sharply ironic 1971 Stanley Kubrick film is the only x-rated movie to have been nominated for Best Picture?   Each table puts their answer on a slip of paper and the wait staff comes around to pick them up.  Of course lots of negotiation goes on within each team about the correct response.  As you look around the room, you always see at least one table that's taking it all a bit too seriously and looks as if they might break into a fistfight.  If a table is debating its answer for too long, the room starts singing the theme song for Jeopardy as a signal to wrap it up. 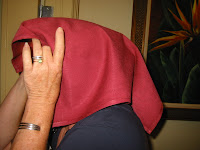 At the end of the evening the Magnificent Seven had made a magnificently poor showing.  Of a possible 75 points (including possible points from the "half time" question), we had only 38.  (Just to put it in perspective, the leading team had 60 points!)  But wait--we had the chance to redeem ourselves with the bonus question, much like in Jeopardy.  The bonus question is always a "ranking" question and last night's was "From highest to lowest, rank the price of gas as of April 10, 2011 in the following four countries:  Germany, United States, Australia and Venezuela."  We could allocate up to 20 points on the answer.  Thanks to my helpful input (not), we ranked Australia ahead of Germany and also got this wrong, leaving us with 18 points at the end of the evening.  Rich said that this was perhaps the poorest showing of all time!  We skulked out of the room in a show of solidarity.  Yes, we did poorly, but it was a hilarious evening spent with good friends.  And we all learned some things and had a nice dinner to boot!   That counts as a win for me regardless of our score.

Postscript:  In case you are interested, the answers to the questions above are the Explorer, 2320 miles and Clockwork Orange.   Did you get them right????
at May 15, 2011