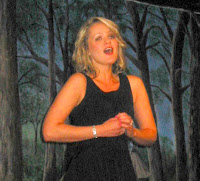 After attending a few of the Charlotte Symphony Orchestra's concerts, I ponied up my $25 to become a member of the Phantoms of the Orchestra, the CSO's volunteer support organization. Being a member of the Phantoms has all kinds of fun benefits such as attending concert rehearsals and sporting your Phantoms signature scarf at the concerts. When I received an e-mail inviting me to the Phantom's inaugural Bach's Lunch featuring a performance by soprano Johanna Fincher, I decided to attend.

When most people picture an opera singer, they envision a large man or woman, often wearing a Viking helmet complete with horns.  (OK, some people might think of Luciano Pavarotti in his tux but I prefer my vision!)  Either way, soprano Johanna Fincher does not fit this mold.    She is a gorgeous young woman.  As soon as she opens her mouth to sing, though, you have no doubt that she is the real deal.

Like any smart performer, Johanna started off her performance with a couple of crowd pleasers, "I Could Have Danced All Night" from My Fair Lady and "Think of Me" from Phantom of the Opera.  She then segued into some operatic material, including arias from Mozart's Magic Flute and The Marriage of Figaro.  Johanna introduced each number, giving the audience a bit of context.  Not being an opera buff, having this background helped me to appreciate each aria on a deeper level.  For instance, before she began her piece from Offenbach's Tales of Hoffman, Johanna explained that she was performing an aria sung by Antonia, a young woman suffering from consumption who couldn't resist singing despite having been told that it might put too much stress on her weakened body.  Johanna also shared that this aria was the piece that she performed nearly ten years ago for her audition with the Charlotte Symphony Orchestra.  She captured the role of Antonia, and this cemented her commitment to pursuing a musical career.   It's nice to feel that the CSO had a role in launching this young woman's career.  When you listen to her sing, you realize how a voice truly can be a musical instrument.  Not only does her voice have an incredible range, you feel the emotion of the role that she's playing, be it the sadness of Antonia or the joy of the mermaid from Haydn's "Mermaid Song" as she sings "Follow me, follow me, to where the rocks of coral grow."

Johanna finished her performance with two wonderful pieces that showed off her range--"Summertime" from Porgy and Bess and Mozart's "Alleluia."   This is the third time in the last few months that I've heard renditions of "Summertime."   Canadian Brass included the number in its show at the Van Wezel last December and the Gulf Coast Symphony included it in its The Great Gershwin show in January.  Johanna's performance was head and shoulders above either of these versions.   It was truly wonderful and her voice showed both nuance and power.   Her performance of "Alleluia," which was dedicated to outgoing CSO Executive Director Chari Stanley-Leitch, was equally enjoyable and a bit of a teaser for the CSO's  performance in November of Mozart's Requiem, in which Johanna will perform.

The luncheon was a real treat.  Johanna was terrific and the intimate venue of the Punta Gorda Historical Women's Club made me feel like an honored guest.  Plus we were supporting the Charlotte Symphony Orchestra.  There's no doubt that the inaugural Bach's Lunch was the start of a great new Phantoms tradition.

Postscript:  Florida Weekly published this post in its edition for the week of May 12th-May 18th!
at April 30, 2011