Pedaling down the Myakka River 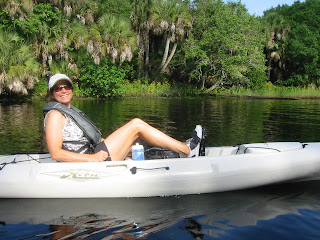 Nope, this is not a typo!  I went on a kayak adventure this week to Snook Haven and borrowed a friend's kayak that you can either pedal or paddle.  It was a thing of beauty!  I'm getting ahead of myself, though.  The last few summers in Nova Scotia I've wanted to try kayaking.  People paddle around the Back Harbor behind our house and always look very peaceful and at one with nature.  Somehow, though, I've just never gotten organized to rent or borrow a kayak, find someone to show me the ins and outs, etc., etc.  One of the many monthly activities organized by members of the Isles Yacht Club is a kayak outing.  Someone plans the trip, and you can bring your own kayak or rent a kayak that will be delivered to you on site.  Any excuses I had for not giving a try were out the window. 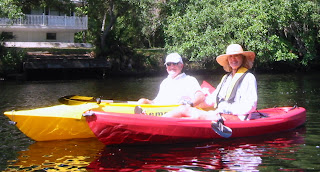 April's kayak outing was a trip to Snook Haven on the Myakka River that was organized by the always game Bruce and Dorrit.  Knowing that I'd be in good hands, I signed up for the trip and a rental kayak.   My friend Stephanie heard that I had signed up for the outing (don't ever mistake Punta Gorda for anything other than a small town!) and she was planning to be out of town that day so she kindly offered her kayak for my use.  Murray, another IYC buddy, offered to go on a test run with me the day before the outing so that I could hit the water running (so to speak).  On Sunday morning I headed over to his place to check it out.   Once Murray showed me the basics, we were off for a quick ride around the canals.   The kayak is incredibly easy to maneuver and I felt that I could go all day.   I was ready to tackle the waters of Snook Haven.

We arrived at the "camp" bright and early Monday morning and got our gear unloaded.  (Actually, Murray and some of the other guys did most of the heavy lifting but I did look on encouragingly.)   We got my kayak in the water and I was off.  There was a bit of a problem initially--when I pedaled I went backwards!  Luckily, I was in earshot of instructions and just had to reinstall the pedals in the opposite direction.  With that difficulty behind me, I was off!

Snook Haven is located at the intersection of Charlotte Harbor and the Myakka River and it looks like something right out of Jurassic Park.   Not surprisingly, a couple of movies have been shot there, the most notable being the 1947 horror flick Revenge of the Killer Turtles.   It was a great morning.  We had no destination--we just paddled (or, in my case, pedaled) in one direction for an hour and then head back to the landing area for lunch.  We'd been promised  lots of alligators along the way (but assured that they would be of the friendly variety)   We did see one gator along the way sunning himself in the sun and I dutifully pedaled over to get a better look and a picture.  He looked at me in a bored manner and slithered into the water.  It was extremely anticlimactic, but in this instance I'd rather err on the side of uneventful.

We lunched at the restaurant at the camp and it was definitely on the rustic side.  The food was perfectly fine, though, and everyone had a good time comparing their thoughts about the paddle and talking about their summer plans.   It was a perfect first kayak outing for me.   Great scenery, great company and a great kayak!  (Thanks again, Stephanie!)  I made it through the day using my paddle only to push off from shallow water and to maneuver the 20 feet in once I'd taken the rudder up (which wasn't pretty, let me tell you.)  Don't worry, though, I'm getting plenty of paddling in in my practices for the upcoming Dragon Boat Festival, which promises to be quite a day of racing and festivities.  Watch this space for the post-race report.
at April 22, 2011