It's almost impossible to believe that it's been 25 years since my first day on the job as a corporate lawyer at the now-defunct Breed, Abbott & Morgan.  I'm sure I was nervous on a number of levels.  Would I like being a lawyer?  Would I be good at it?  Would I enjoy working with the people there?  (I'm also sure I was wearing something frightfully Working Girl but I digress.)  Any fears I had would soon be assuaged--at least with respect to the people side of the equation.  I still remember another new lawyer named Ellen inviting me out for drinks after work with some other folks from the firm. I can't remember whether Suzanne (another baby lawyer) and Andrea (a seasoned third year associate) joined us that evening, but I do know that the four of us quickly became friends and have been friends ever since.

We decided to celebrate our 50th birthdays with a week-end get-away to Montreal.  This was no mean feat--Andrea is the general counsel of the US Tennis Association, Ellen and Suzanne each have four kids at home and I of course am very busy soaking up the sun in Punta Gorda.   But we managed to get it all together--and what a wonderful week-end it was! 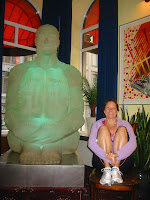 When I was thinking about what to write, all I could really come up with was "Talk.  Walk.  Eat.  Laugh.  Repeat."    We arrived on Friday afternoon at L'Hotel, a boutique hotel in the Old Town of Montreal that we learned is owned by Georges Marciano of Guess jeans fame.   (Georges was actually on the premises and I had a quick chat with him in the elevator to tell him what a fantastic staff he has.  He was quite nice.)  Georges has decorated the lobby and corridors of the hotel with signed lithos and sculptures by artists from the 1970s Guess jeans era--Andy Warhol, Robert Rauschenberg, Jim Dine and Robert Indiana to name a few.  Music from the '70s is piped into the lobby, which makes you constantly feel like dancing.   No wonder the staff seems so happy to work there!

The forecast for the week-end had not been good--chilly and rainy--but the weather gods smiled on us and arranged for perfect conditions for walking the city.  We took in Parc du Mont-Royal  ("Montreal"--get it???), enjoyed a great view of the City, and stopped in lots of interesting little shops along the way.  We had some great meals while we were there.  The first evening, after enjoying some music by a bossa nova trio at the hotel, we went to a trendy place called Restaurant L'Appartement.  I think we were the oldest people there but it was fun and the food was great!  The second evening was Modavie, another local place with a jazz trio providing the entertainment. 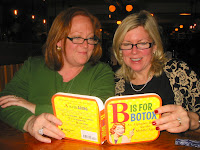 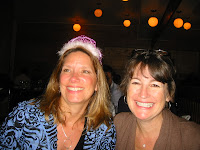 On Sunday night we went to Au Pied de Cochon, a hot restaurant that is a favorite of my friend Wendi.  (The chef at M. Wells-- where I had eaten the previous Thursday night in NY--came from PdC, as it's called.  Check out my post on "36 Hours in New York" to read about it.)   Everyone we mentioned our reservations at PdC to nodded knowingly (although they did seem to wonder how we had found our way to this place.)  Wendi had paved the way for our dining experience, pre-ordering starters of fried pork rinds (which kind of tasted like popcorn), codfish fritters (delicious!) and succulent foie gras poppers.  (Did I mention that the restaurant is known for its foie gras?)  From there it was on to the Plogue a Champlain, a decadent appetizer that included a homemade crepe at the bottom with, among other things, foie gras and an incredible sauce that incorporated maple syrup, and steak frites.  We had decided to do a birthday twist on Kris Kringle and had each been assigned the name of someone to bring a present for.  Lots of sentimentality ensued, with photos and frames and hand towels with sayings about friendship embroidered on.  Since it was my actual birthday, I was the recipient of a pink birthday tiara that I proudly wore throughout the evening.  By the time the complementary birthday dessert arrived (topped with a sparkler, which was much nicer than a big 5-0 candle), I had had the nicest birthday that I could possibly imagine.

Montreal was a special place to celebrate my birthday--it's a great city and I'd love to go back sometime--but the really special thing was being able to spend time with these wonderful friends away from the demands of our everyday lives.  Talk. Walk.  Eat.  Laugh.   Repeat.  Really, who could ask for anything more?
at April 16, 2011