A few weeks ago, I started seeing some publicity about "War on the Peace River," a Dragon Boat Festival that was going to be held in April.  I had absolutely no idea what a dragon boat festival was, but it sounded exotic and intriguing.  One morning before my Ashtanga class, I was asked if I'd be interested in participating in the Yoga Sanctuary's team in the Festival.   The basics were explained to me:  dragon boats are a type of boat that is raced by a 20 person team, no experience was required and it would just be a fun race that would last about two minutes.  Sounded pretty harmless to me, and I'm all about trying new experiences, so I signed on.  Little did I know what I was getting myself into!

After committing to being on the team, I received a practice schedule--we would have three one hour sessions on the water to learn the strokes and sort it out.  I missed the first outing so I felt a bit behind when I arrived for the second team practice.   The rest of the crew had already practiced the starting sequence (five "long, hard" strokes, five faster, five faster still, then stroke, stroke, stroke) and knew the commands, which were reviewed by our drill master steerer.    All I can say is that rowing is seriously hard work.  My heart periodically felt like it might beat right out of my chest and I lost the ability to count strokes out loud somewhere around the one minute mark.  I had learned that we would have at least two races on the day of the Festival, three if we were competitive--I couldn't believe that we were going to have to do this multiple times in one day!  By the end of the practice, I was wet and exhausted and a bit stressed out.

To those of you who know me, it won't come as a surprise to hear that I didn't play any team sports when I was growing up.  The closest I came was being on a relay team when I ran track in junior high.   (In the interest of full disclosure, I joined the team in hopes of impressing a boy.  I don't expect that my skinned knees and elbows ended up being all that impressive.)    And I have to say that I didn't think about the implications of dragon boat racing being a team sport when I signed up to row with the Yoga Sanctuary team.  It wasn't until the morning of the Festival that I realized that if I ended up out of sync, it would affect the whole team's performance.  Yikes! 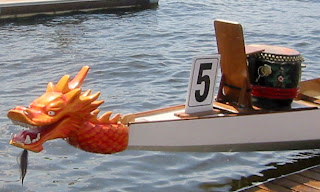 I got to Laishley Park around 8:30 and about an hour later made my way with the rest of the Shanti Dragons to the holding area to queue up for our first race.  I was in the second row (the "stroke" section) so I only had to watch the woman sitting in front of me to keep on pace.  We were racing against three other boats in our heat, including what turned out to be the winning boat from the Punta Gorda Club (which, I will note, had 12 men on it compared to the four men on our team).  The team was a bundle of nerves as we paddled our way out to the starting line.  We had been admonished to "keep our heads in the boat" and not worry about what the other teams were doing or listen to any of the ambient noise.  After we had lined up for the start, the horn blew and we were off.  I didn't look up the entire race but could hear the team beside us counting and it sounded like they were a bit behind us.  It felt like we were in sync and moving through the water well but it was hard to tell.   We were edged out in the last 50 meters by the Punta Gorda Club but we felt good about the race, especially when we found out that our time was a very respectable 1:58:13.

I'd by lying if I said that my competitive instincts didn't kick in at that point.  We had had no idea if we would be a fast team or just be able to make it across the finish line.  We were in a tough division (Fitness and Health) and ended up coming in third out of seven teams based on our time in the first race.  Overall, though, we had come in fourth out of the 25 community boats so all we had to do was kick it up a notch and we felt that we might have a chance at winning.

There was a lot of time before the second race--I'm talking three hours of time to just sit around and think about our next performance.  The boats that we had raced against in the first heat had been randomly assigned.  In the second race, we would be going against boats whose times were comparable to ours--one that had a faster time and one with a slower time as it turned out.  We rationalized that it would be good to have a boat slightly ahead of us so that we would push ourselves to overtake them.  When we were up, we paddled out to the start, conserving a bit more energy than we had the first time.  We got a poor start but had a strong finish.  We came in third in our heat and came off the boat feeling somewhat dejected.  When we learned we had shaved four seconds off our time in the first heat, though, we got pumped up.  Our captain told us she was sure that we would be fast enough to qualify for at least the consolation round (which would be the community boats with the fourth-sixth fastest cumulative times).

We did end up competing in the consolation round, and finished up our efforts with a fifth place finish overall.   The whole thing was an experience unlike any I've ever had before.  You could feel the comaraderie of our team develop over the course of the practices and even over the course of race day.   We felt a real sense of accomplishment at the end of each race, knowing that we had stayed more or less in sync and looked pretty darn good out there.  A big thanks goes out to the Draggin' Dragons, the local dragon boat club that got the Festival on the calendar and taught all the teams the ins and outs of dragon boat racing, with special thanks to Lynda, our team captain, and Cathy, our steerer extraordinaire.  There's no doubt that the Shanti Dragons will be a force to be reckoned with next year!
at April 26, 2011