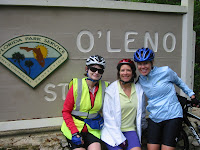 The final day of our bike trip was the real deal.  Knowing that we had 50 miles to ride, we got an early start (okay, it was 9:00) after fortifying ourselves with a huge breakfast at the Santa Fe Cafe.  The weather was amazingly cooperative--there had been a major thunderstorm during the middle of the night that had cooled things off even more and it was in the high 50s.  Jackets were even required!

Our first stop was O'Leno State Park.  The highlight of our visit to the Park for us was a trip across the swinging suspension bridge.  It was much sturdier than the suspension bridge I visited in Myakka State Park (which could accommodate only three people at a time) but still would not have been much fun in a high breeze. We learned that the Park is named after a now-defunct town named Leno ("Old Leno" became "O'Leno").  Originally, the town was called Keno after the gambling game that is still played today.  This seems like a strange namesake to me, and religious and commercial townspeople felt the same way, forcing the name change in 1876.    The Park looked like it had some nice areas to explore but we had a long day ahead of us so we didn't waste any time in getting back on the road. 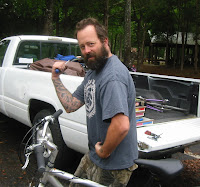 Our next stop was Ichetucknee Springs State Park.  You could hear me coming as I rode into the parking lot by the rest area--my brakes had been squealing all day, which we attributed to the rain overnight.  As I pedaled in, a guy asked me if I wanted help with my brakes.  Yes, please!  One of the benefits of going on the Bike Florida ride rather than riding on our own was having both a sweep van that could pick us up if we wimped out and mechanics that could help with issues that arose while we were on the road.  Alexi was terrific and he quickly "toed-in" my brakes and checked out Pam's and LaNae's bikes for any issues.  Like many of the folks we met while on the trip, he was a volunteer who loves biking and just wanted to help out.  (He has a business making custom bikes which I will now plug because he was so helpful and rather dashing, in that scruffy, outdoorsy kind of way.  It's http://villincycleworks.com/ .) 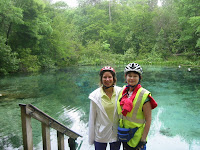 We made stops at the rest areas at both the northern and southern ends of Ichnetuckee Park. The southern rest stop has easy access to two of the nine springs that are in the Park.   (A mind boggling 233 million gallons of water flow from the springs in the Park daily.)  The water is beautiful and clear and you can see why this area is a mecca for tubers and kayakers.   (People do swim there as well but the "Alligators--Swim with Caution" sign would make me just the tiniest bit hesitant!)

When we left the Park, we still had 20 miles to ride before getting back to our car.  The first 30 miles hadn't been too difficult, but the last 20 were a bit tough going.  It seemed like we were biking into the wind no matter which direction we were heading. (I know, I sound like the old timer who walked to school uphill both ways in the snow with no shoes on but that's how it felt.)  Pam, who has been taking spinning classes, got up a good head of steam and took the lead.  LaNae, who has been babysitting her grandchildren for the past five weeks, contemplated the sweep van but did not give in.  I held my own but noticed that people had quit telling me how comfortable I looked on my bike and started telling me how whipped I looked.  Less than two hours later, we were back at our cars, legs a bit wobbly but feeling quite accomplished.

Nobody would mistake the Bike Florida trip for a Backroads vacation but it was an easy and inexpensive way to participate in an organized ride and get an introduction to biking in Florida.  More importantly, it was a great opportunity to spend some time with friends away from our every day lives and responsibilities.  I came back to Punta Gorda physically tired but mentally rejuvenated--who could ask for anything more?