Pam, LaNae and I woke up ready to put our pedals to the metal and get moving.    Unfortunately, registration--which was where we would get our route information--was not until 12:00.  (The Bike Florida team had to see the riders off from Gainesville, get over to High Springs and get organized before welcoming the bikers joining the ride.)  Our hotel was about 3 miles from the registration site so we decided that we would do some exploring on our bikes before we started the organized ride.  Just as we were about to head out, it started to torrentially rain.  Time to rethink this plan!   We decided instead to drive with our bikes and gear to a breakfast spot to figure out our morning.  The first place we came upon was the Santa Fe Cafe and we pulled in.  What a find!  There was no cereal or fruit or anything resembling healthy food on the menu so we had to succumb to the offerings of homemade biscuits and gravy, eggs, grits and our morning ration of pork fat.  We met Steve, one of the owners, and learned the story of the cafe, which is named for the nearby Santa Fe River.  When Steve and his brother were children, they decided to fix their parents breakfast in bed one morning.  This was so well-received that they took to creating hand scribbled menus for the family dinner (which happily coincided with the meal that their mother was preparing).  From there a business was born, and we were the beneficiaries on each morning of our stay. 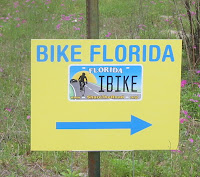 By the time we were done with our leisurely breakfast, it was 11:00 so we went over to the registration site to find out if we could check in early.  We were in luck!  We collected our tee shirts and route maps and set off to Alachua, where we would turn around and ride back to High Springs, presumably with some of the 450 riders coming from Gainesville.  We had a bit of trouble figuring out the directions and I learned that my friend Pam is very man-like in this regard and does not like to ask for assistance.   After riding around somewhat aimlessly for about an hour, we came upon a rest stop that was set up in the center of town for the bikers coming from Gainesville. Eventually, we got headed in the right direction, and people riding all sorts of bikes--including one tandem recumbent bike--began passing us going the other way.   Once we got to Alachua and started talking with the volunteers at the rest stop there, we learned that we were the ONLY riders that had come from High Springs that day!!!  In fact, the people who were responsible for setting up the signs identifying the route had not been told that there were riders coming from the other direction so no markers had been set up.  (Let me tell you, it was remarkably easier on the way back!)   We found the next day that it was better to follow the signs than the written instructions--there were a number of instances in which the directions said to go left when they should have said right and vice verse--so we felt much better about the problems we had figuring out the route early on in the ride. 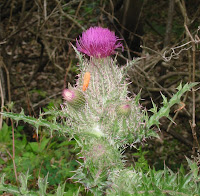 All in all, though, it was a fun day.  The ride was in a pastoral area with lots of cows and flowers and the weather turned out to be perfect for an afternoon on a bike--overcast and in the low 70s.  Alachua felt like old time Florida with its single row of shops in town and its drive-through burger joint with picnic tables out front.  I was struck by the amount of blue and orange Florida Gator memorabilia that we saw both in town and on the ride until I remembered the proximity to Gainesville.  (As I looked a bit more into the history of the area where we were biking, I learned that it was founded by the Oconee Indians, who were the original Seminoles.  Anyone who knows about college football in the State of Florida knows that the University of Florida Gators and the Florida State Seminoles are bitter rivals so I found a bit of humor in this.)  In any event, the 30 mile ride was remarkably easy on my new Giant hybrid bike and I would be remiss not to put in a plug for Acme Bicycle Shop in Punta Gorda.  The folks there were incredibly helpful in fixing me up with the right bike and making all the necessary adjustments so that the ride would be comfortable.   This was a good thing, because the short option for the next day's ride was 50 miles!  With that information in mind, we had a quiet meal at a local diner (fried chicken with another biscuit for me) and tucked ourselves in for a good night's rest.
at April 02, 2011