Yeehaw! The Rodeo is in Town!

When I heard a few months ago that near-by Arcadia hosts a rodeo every year, I knew I had to go.  I've only been to a rodeo once before and it was quite the event.  I was dating a guy at the time who got a job in Houston and, like all things Texan, the rodeo there was larger than life. I remember not only the events like steer wrestling and bucking broncos, but also the 4-H kids proudly showing off their tremendously huge pigs and oiling down their cows so that they would gleam for the competition. 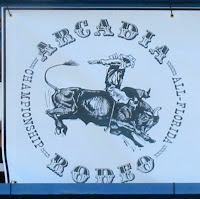 The 83rd Annual Arcadia All-Florida Championship Rodeo was not quite as grand as the rodeo I attended in Texas, but it was still an experience.  The first thing that hit me as I walked through the gates was the smell.  There is no mistaking that you are in the midst of livestock!   The second thing that struck me was the number of people wearing cowboy hats.  A lot of the people had clearly purchased them for the occasion but there were enough bow-legged, jeans- and bandana-wearing old guys walking around for me to feel like this was the real deal.

The rodeo kicked off with bareback riding.  Cowboys come out of the "chute" and are required to have their feet above the horse's shoulders until the animal's front feet hit the ground. The horses buck like crazy and the cowboys hold on for dear life.  Some of them are thrown quickly; others held on for the entire time.  Our favorite was the guy who jumped off his horse after the buzzer sounded like a gymnast doing a dismount.  The ones who were able to lie almost prone on their horses seemed to score the best.  We figured out that if you start slipping to the side, you are toast.    The saddle bronc riding was a later event and--to my inexperienced eye--was basically the same but for the fact that the rider is in a saddle.   Either way, it's pretty crazy.

As I watched these guys, I thought about my uncles and cousins back in Kansas who broke horses for a living.  My Uncle Cap was a gruff old cowboy who always scared me to death when I was little. I will never forget the time we were visiting my grandmother and my sister and I went to a friend's house for a little ride on their horse.  It did not go well and we both ended up falling off, Suzanne onto the soft grass and me onto the gravel driveway.  To add insult to injury, Mrs. LeFever pulled down my pants in front of her kids (including boys!!!) to see how badly I was hurt.   Uncle Capp laughed and laughed when he heard that story, which I did not think was funny in the least.  But I digress.

There were also a number of steer-related events at the rodeo.  (They say "steer" but they were certainly not full-size, although I expect they are plenty strong.)  First there was the steer wrestling, where the steer is let out of the gate followed by the cowboy on his horse.  The cowboy is supposed to grab the steer's horns from his horse, then jump off and wrestle the steer to the ground.   One guy accomplished this is less than 10 seconds, which was pretty amazing.  Others never even got near their steer (at which point a tune like Patsy Kline's "I'm Sorry" would play over the loud speakers.)   Then there were two roping events, team roping and tie down roping.  In the team roping, one of the pair is responsible for lassoing the steer's horns and the second is responsible for lassoing its back legs.  Time is added to your score if you only lasso one leg.   You really only get one chance to rope the little guy, so if your aim is off, that's it.  I think there was only one pair that was successful in getting the horns and both legs tied before the buzzer rang.  In the tie down event, the cowboy lassos the horns of the steer and yanks it back towards the horse.  When the cowboy reaches the steer, it has to be standing and he has to wrestle it to the ground, tie down three of its legs, throw his hands into the air (like at the end of a challenge on Top Chef) and back away for six seconds to see if the rope holds.   A couple of guys got their steer tied down in a blink of an eye; others gave you time to drink a cup of coffee before they had them under control.

We also saw a "quadrille," which is eight pairs of riders who do the equivalent of a square dance with their horses, and the "calf scramble," where children up to the age of 12 are invited into the corral to chase steer around and try to pull the kerchiefs from their tails.  This looked kind of dangerous to me but lots of parents let their little ones--many wearing toddler sized cowboy boots--out for the fun and most of them even ran in the right direction (which is more than I can say for my nephew's little league football games).   At this point, Jay had had about all the fun he could take, so we left before the barrel racing and the bull riding.

All in all, this was quite an entertaining way to spend an afternoon.   It just goes to show that Southwest Florida really does have it all!
at March 12, 2011