Whoo Is It? The Burrowing Owls! 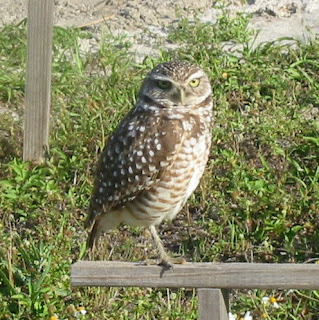 Punta Gorda is full of wildlife that I wasn't accustomed to seeing in the Northeast.  (Come to think of it, I basically never went into any natural habitat in NJ, so if an animal didn't come onto the golf course, I wasn't going to see it.)   I've heard people mention the "burrowing owls" that live in Punta Gorda Isles but never had actually seen any until a couple of weeks ago. 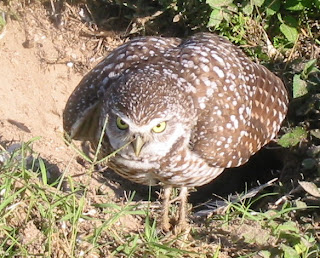 First, let me say that you do NOT want to have burrowing owls on your property.  They are a "species of special concern" in Florida, which "warrants special protection...because it has an inherent significant vulnerability to habitat modification, environmental alteration, human disturbance or substantial human exploitation which, in the foreseeable future, may result in it becoming threatened."  The bottom line is that if burrowing owls are on a piece of land that you own that has yet to be developed, you had better hope that they are tucked away in a corner of the property or you are out of luck.  In fact, I just heard that some people who are building a house around the corner had to reduce its size by 2200 square feet in order to avoid disturbing the owls. They were not happy campers.   (I did some research and according to Wikipedia there is a "passive relocation" program for burrowing owls that takes a period of months, but I haven't heard of that being tried here in PGI.)

Having said that, these owls are pretty darn cute. They are about four inches tall and have brilliant yellow eyes.   They live in burrows similar to those dug by prairie dogs.  When my friend Maggie and I came upon them, they were cleaning each other with their beaks.   We found out that if you get too close to the owls' home, they make a hissing noise and spread their wings.  You can tell by the second photo that they are pretty intimidating--lol.

That's it from Bird Central here in Punta Gorda.  Keep your eyes peeled--you never know what you'll see out there!
at March 01, 2011