Spent the Day in Matlacha 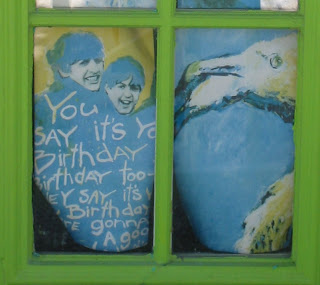 The title of this post only makes sense if you know that the pronunciation of Matlacha is "mat-la-shay" (so it actually rhymes with "day").  OK, so it loses a bit in the translation!  Anyway, yesterday I went with some friends to the funky little town of Matlacha, one of the towns on Pine Island.  With the crazy colors and funky art, it felt like a bit of Key West in my own backyard and I can understand why Greater Pine Island calls itself "Florida's Creative Coast."  We stopped in a number of galleries, with my favorite being Lema Lovegrove's studio.  Both the gallery and the outdoor space were filled with signs saying "no photos without permission," which was pretty daunting because I really did want to take pictures everywhere I looked.  (I did furtively snap a shot of some coconuts with greetings from Pine Island that are ready to be put in the US Mail, but it didn't turn out to be "blog worthy."  Definitely more original than the standard "my XX went to Florida and all I got was this lousy tee shirt" souvenir.)  The picture at the top was taken by the woman at the shop and will give you a sense of how colorful and original Lovegrove's work is. The artist lives next door to the studio in a home that has a glass six panel door that opens onto the street.  She apparently was tired of people peering into her house so she painted the panels of the doors.  She also is apparently a big Beatles fan as a lot of the art included Beatles lyrics and pictures of the Fab Four.  Very fun. 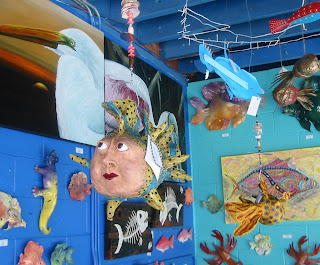 Almost every shop had something eye catching to look at, even if it didn't inspire us to open our wallets.   One gallery had these paper mache hanging fish that were quite crazy and reminded me of some of the art at the gallery downstairs from the LeHave Bakery in Nova Scotia.  (The fish are so unique they're hard to forget!  I should have taken a look at the artist's name to see if it was the same person or if there are two people who're doing the same type of work.  Perhaps there is a reason for the "no photos" sign at the Lovegrove Gallery.)

The buildings that housed the shops and galleries in Matlacha are these fun wooden houses painted bright colors.  I heard one proprietor telling a customer that the houses were originally "cracker houses," meaning that they were owned in the day by cowboys.  (I learned that they were called "crackers" because of the cracking sound made by their whips.  I have always wondered about the derivation of that term and now I know!)   I also learned that the word "Matlacha" is from the language of the Calusa Indians and that it means something like "water to the chin."  Apparently at low tide the waters in Matlacha are only a few inches deep.  When combined with some great birding, this makes Matlacha a favorite destination of kayakers.  Matlacha also hosts the annual Southwest Florida Blues Festival, which is already on my calendar for next year.  So many fun things to do, so little time!