Pedal and Play in Paradise

Yesterday I participated in the Pedal and Play in Paradise Bicycle Tour sponsored by Team Punta Gorda and the Isles Yacht Club to benefit The Leukemia & Lymphoma Society.  Riders had several different routes to choose from:  15 miles, 30 miles, 60 miles and the 10 mile mystery bike tour.  I opted for the mystery bike tour (not only because it was the shortest option!) and it was a great morning.

I met my friends by the Club at 7:40 just as the sun was rising.  We pedaled to Laishley Park to register for the ride and pick up our route and instructions.  The event was extremely well organized, with tables for each of the route options, a station for tee shirts and towels and a continental breakfast.   The mystery bike ride required us to go to four locations in Punta Gorda--Ponce de Leon Park, the Nature Park, Fisherman's Village and Laishley Park--and find the answers to five questions in each location.   We decided to start at Ponce since it was the furthest away, hopped on our bikes and set off. 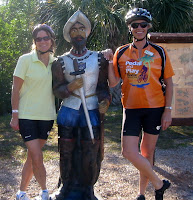 Upon our arrival, we immediately found the answer to the first question--What animal has the most pictures on the Peace River Wildlife Sign and how many times does it appear?  Can you guess the answer?    We learned at the recycling center in the Park that an aluminum can can last over 500 years if it is not recycled.  (Yikes!) And we found the Code of Ordinance sign that for some reason has the restriction on carrying firearms in the Park taped over.   Very bizarre.  While in the Park, we also came upon Ponce himself.  Given the population of Punta Gorda--and my impending 50th birthday--I personally think that a search for the fountain of youth would have been a nice element to incorporate into the ride, but that was left for another day.

From there we were off to the Nature Park, which none of our group had previously explored.  It is a nice little park with lots of info about local flora and fauna.  The most interesting factoid that we learned while there is that female armadillos always give birth to quadruplets of the same sex.   Who knew?  Then it was off to Fisherman's Village where, among other things, we began an elusive search for a pay phone that was removed two weeks ago! 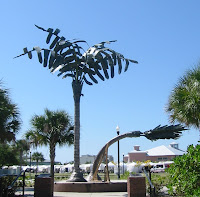 The final stop on our tour was back at Laishley Park.   One of the questions involved the sculpture The Spirit of Punta Gorda.  The picture definitely does not do justice to this interesting piece of art.  As you might be able to tell, the sculpture is comprised of two palm trees, one that is blown nearly horizontal and another that stands tall and proud.  In the foreground of the sculpture is a sun dial that is stopped at 4:39, which is the time at which Hurricane Charlie struck.  The first palm represents the impact of Charlie on Punta Gorda.   Even though it has been seven years since this hurricane hit our area, its effect on Punta Gorda is still frequently a topic of discussion.  Team Punta Gorda was formed in the aftermath of the hurricane and its mission is to bring together residents, business and property owners, and government officials to rebuild and revitalize greater Punta Gorda.   They have done an excellent job.  We now have a vibrant downtown area and, from what I understand, a sense of community that is stronger than existed before Charlie hit this little town.  Thus the standing palm in the sculpture represents the rebuilding of Punta Gorda, the strength of its citizens and the pride that people feel in this community.  The Spirit of Punta Gorda was a great reminder of the nice community where we now live and ending our mystery bike tour there was the perfect ending to a great morning.
at March 20, 2011