Salvador Dali is synonymous with the world of surrealism.  Everyone who's taken a 20th century art history class is familiar with Dali's The Persistence of Memory with its wilting clocks.  I visited the Dali Museum in St. Petersburg this week (http://thedali.org/) and learned that Dali's surrealistic art is only one part of a long and varied career.

The museum more or less displays Dali's works in the order in which they were created.   Typically when you view an artist's early work, you get a glimmer of what's to come.  Not so with Dali.  You can't imagine how surprised I was to see his early impressionistic works, which could have been painted by Monet.  In fact, in most of his works prior to his surrealistic stage, you can readily see the influence of other artists.  In his cubist-like Portrait of My Sister (1923), Picasso's influence is apparent.   His Study of a Nude (1925) is reminiscent of Renoir with its fleshy rose colored woman's back.  And his 1928 painting The Ram  nearly cries out "Matisse" with its cut-out style.  I actually had a hard time reconciling my vision of Dali's work with his actual paintings in front of me. One interesting note relating to this time in Dali's life:  In the early '20s, he was expelled from art school because he refused to be examined by the baccalaureate committee on the basis that he knew more about Raphael (presumably the subject of the examination) than the committee did.  Obviously, Dali's flair for the dramatic was in place at an early age. 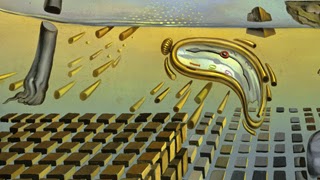 In 1929 Dali read Freud's Interpretation of a Dream and thereafter embraced the idea of surrealism (which is defined, more or less, as a 20th century cultural movement involving unexpected juxtapositions, often of a dreamlike nature). Dali's Average Bureaucrat (1930) was just one of his many surrealistic works on display at the Museum.  A bit disappointingly, The Persistence of Memory was not included in the collection (although his post-surrealism period The Disintegration of the Persistence of Memory (1952-54) was on display)--you have to go to MOMA in New York to see that work.  In 1934, Dali was expelled from the "official" group of surrealistic artists of the period (which included Max Ernst, Rene Magritte and Yves Tanguy) for refusing to embrace their leftist politics.   Dali refused to accept this expulsion, declaring that, "I myself am surrealism."   It's a bit hard to argue with this statement when you learn about some of the bizarre things that Dali did.  Here's one example. In 1936, he appeared at the London International Surrealist Exhibition to give a talk wearing a deep sea diving suit and helmet.  He had arrived carrying a billiard cue and leading a pair of Russian wolfhounds (just in case the diving ensemble wasn't sufficiently jarring), and had to have the helmet unscrewed as he gasped for breath. He commented that he was just trying to show that he was "plunging deeply into the human mind."   OK, then.

Dali's work kept evolving throughout his life, and many of his later works also reminded me of other artists.  His Portrait of My Dead Brother (1963) is evocative of Andy Warhol's work.   And his 1971 series of lithographs entitled "Les Diners de Gala" included works that called to mind the art of Arcimboldo (a Renaissance painter who was the subject of one of my earlier posts).  One of Dali's last works was a hologram of Alice Cooper--it didn't immediately call to mind the work of any other artist, but it certainly was surreal to see a case with the figure of Alice Cooper whirling about!

A bonus special exhibition contained 10-15 Philip Halsman photos of Dali taken in the 1940s and '50s.   Many of these photos were actually an early form of performance art and are very sophisticated to have been taken in an era long before Photo Shop had been conceived.  One of my favorites is this Mr. Potato Head-like "picture" of Dali (when in doubt, look for the moustache!)

As you can tell, my outing to the Dali Museum was loads of fun.  Seeing the scope of Dali's work is truly stunning.  Not only is the art itself varied, the medium is as well.  He used oil, pastels, ink and gouche, all to great advantage.  And I haven't even touched upon his film work, which you also get a peek at at the Museum!  Part of the fun of my outing came in going with my friend Louise, who I've known since high school.  As we walked through the galleries, we commented on how lucky we were to be able to see these incredible paintings.  We talked about Mrs. McKelvin, our high school humanities teacher, who, introduced us to great art.  To my recollection, Mrs. McKelvin had never had the chance to view the paintings in person that she taught about in her class with such passion. To get to spend an afternoon with Dali's works was a real treat, and a reminder that we should never take the opportunities that we have for granted.
at February 13, 2011