Biking to breakfast on Saturdays with the Yacht Clubs folks isn't only an opportunity to get some early morning exercise offset by pork fat, it's also a chance to gather some great ideas on things to do in the area.  Yesterday morning I got talking with a woman about walks organized by the AVA (which was quite confusing at first because my lawyer brain kicked in and I thought we were talking about the American Bar Association).   It turns out that AVA stands for American Volkssport Association, a non-profit that sponsors walking clubs and walking events across the United States.

The basic idea is that organizers develop 10K walks within their area.   Some of the walks are  organized events but many are self-guided.  For self-guided walks, a start/finish location is selected and a "box" is housed there with a map of the route and information on the local Volkssport Club.  As I understand it, people who are members of AVA (or the local equivalent) have a book with "stamps" in it evidencing the walks that they've taken.  Eleanor, my breakfast companion, told us that she has completed walks in the capitals of all 50 states--what an accomplishment!  She developed a walk in Punta Gorda for the Meandering Manatees, the local branch of the AVA, and I decided to take advantage of the beautiful weather today to take the walk with a friend. 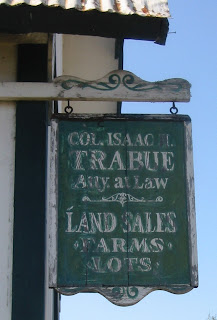 With our maps in hand, we started our walk at Fisherman's Village, a colorful complex of shops and restaurants on Charlotte Harbor.  We followed the directions (which have tidbits of info about fun things you see along the way) and shortly found ourselves in History Park.  I have never been to History Park before, and on Sundays you can shop at a farmers' market in addition to viewing some historic buildings.  The Trabue Land Sales office is a neat old building built by Colonel Isaac Trabue, who was the developer of Punta Gorda.  (I learned on this week's bike ride that Punta Gorda was originally named Trabue and that there was some litigation that lead to the name change, but that's a subject for another post!)  The Land Sales office houses a little gift shop that has for sale, among other things, photos taken by a local birdwatcher.  It turns out that there is an eagles' nest in History Park and the photographer managed to get an incredible shot of an adult male eagle in his roost with a large fish that he'd caught.  The photographer was working in the shop today and she told us about the events leading up to the picture.  She was outside in the park and looked up to see an adult male eagle with a fish in its mouth being chased by a juvenile eagle who apparently thought that fish looked mighty tasty.  The photographer watched the chase with her camera in hand as the adult eagle fended off the juvenile and came to rest in his roost.  She told us that the adult eagle was panting so hard that she could literally see his tongue hanging out of his mouth!  It took him about half an hour to recover sufficiently to enjoy his catch, which gave her an opportunity to take the picture we were admiring.   After perusing her photos (which are pretty amazing) and checking out the wares at the market, we continued on. 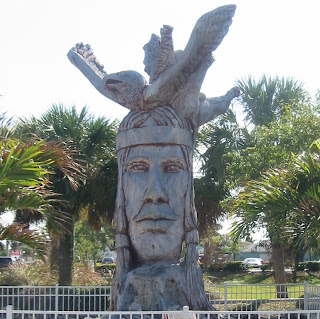 The walk took us onto some streets I'd never been on before and past many of the murals that adorn the walls of the buildings in downtown Punta Gorda.   Eventually, we ended up at the carving of Calostimucu, number 10 in the series of Whispering Giants done by Hungarian sculptor Peter "Wolf" Toth.   I've always thought that this carving was cool, but I like it even more now that I know that Toth carved a series of sculptures depicting Native Americans and Canadian First People and donated one or more to each U.S. state and Canadian Province. (Here's a fascinating article about Toth and the relocation of Calostimucu after Hurricane Charley in 2004:
http://scc.eed.sunnewspapers.net/Olive/ODE/charlotte_sun/LandingPage/LandingPage.aspx?href=U0NDLzIwMDUvMDMvMjA.&pageno=MjA.&entity=QXIwMjAwMA..&view=ZW50aXR5 )


Two hours after starting out, we ended up back at Fisherman's Village, my feet a bit worse for wear but the rest of me happy to have spent a nice morning outside learning a bit more about my community.  I have added several things to my "to do around Punta Gorda" list (which seems to be getting longer by the day), including taking a more formal tour of the murals, visiting the Blanchard House Museum of African American History and Culture of Charlotte County and going on a birding walk with the local Audobon Society.  I'm looking forward to using the AVA's guides to explore other cities and parks in Florida.  And I can't wait until my next bike to breakfast to learn about more fun things to do and places to explore in Southwest Florida.  Who knew that retirement required so much stamina???
at January 16, 2011