I mentioned in my last post that Jay and I have become members of Worden Farm, a local farm.  We go each week and select our allocation of vegetables, some of which are old favorites and some of which require us to stretch our culinary horizons a bit.  Last Sunday, we went to a class at the farm called, "What Do I Do With All These Veggies?" that was taught by Eva Worden, one of the owners of the farm, and Cindi Florit, a member.

The class started with how to identify the vegetables (which isn't as straightforward as it sounds).  Since we live locally, we are able to go to the farm to select our weekly vegetables and we get the benefit of labels saying what it what and pick accordingly.  Members who don't live locally go to a central site each Wednesday and pick up a box of freshly picked veggies.  For those members, there truly can be some mystery ingredients to work with!  One tip was to have a copy of Johnny's Seed Catalogue on hand.  (You can order one at no cost by calling 877-Johnnys.)  The catalogue has handy pictures of various fruits and vegetables that will help you know what you're dealing with.

Once you know what you have, their strongest recommendation was to prep the veggies so that they will be ready when you are.  Most everything should be washed and stored in the frig in a container or a dish towel.  This is apparently important to maintaining an appropriate humidity level for the veggies.  (Unlike veggies purchased at the grocery store, they shouldn't wilt with some water.)  They encouraged the members to freeze what they aren't going to use in the next few days, either in raw form or as a soup or sauce.  We learned that some veggies do better if they are blanched before being frozen. 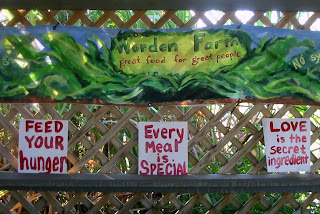 Then we were on to the "cooking" portion of the class.  Eva and Cindi shared several favorite recipes with us, with liberal samplings.  They showed us how easy it is to incorporate veggies into your daily meals.  For instance, there was a "tatsoi" egg bake.  (What is tatsoi, you might ask.  We still don't know for sure because they didn't have any on Sunday so they used swiss chard instead.  It's all about using what you have on hand!)   This was basically a brunch item--eggs, milk, cheese and whatever veggies are in your frig.  Simple and tasty.  The eggplant parm and ratatouille were my personal favorites of the day.  The most surprising (and weird) tasting was a smoothie that had bananas, apples, water, ice and--you guessed it--kale.  It actually tasted pretty good but the green color was a bit offputting.  Cindi said her kids love the veggie smoothies but I'm a bit skeptical.

Both Cindi and Eva encouraged the participants in the workshop not to be slaves to recipes when working with their veggies.  Throw caution to the wind and throw some dandelion greens in your salad or (as we did last night) make slaw using daikon.  For people who need a little assistance, the Worden Farm website (www.wordenfarm.org) has recipes under the "Crops/Recipes" tab organized by vegetable.  Here's to a happy, healthy and vegetable-filled 2011!
at December 16, 2010