Jay is one of the most industrious people I know.  The week after we moved to Florida, he had his real estate license, poised to sell homes to our friends who decide to follow us south.  (This week, that seems like a bit of a bait and switch--the temperature is supposed to get down to 29 tonight!)  Our good friends Jacques and Jill thought that setting up a southern foothold sounded like a good idea and came down to Sarasota in July to look for a condo. 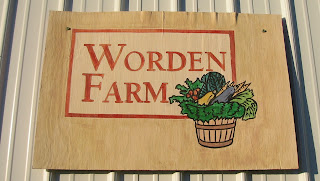 Just to digress a moment, Jacques and Jay have done some competitive cooking on New Years Eve over the last few years.  I call Jacques my "Iron Chef" and Jay my "Top Chef" (which Jay takes some offense at since Iron Chef is a higher accolade.  If you saw the things that routinely come out of Jacques' kitchen, though, you would be astonished.)   Obviously, then, it was important that Jacques and Jill, with their trusty real estate agent in tow, check out some of the local dining establishments before making the move to make sure they were up to their culinary standards.  In the course of their travels, they talked to some restauranteurs about where they got their produce and Worden Farm in Punta Gorda was the answer.  Our curiosity was piqued. 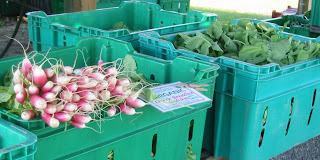 Jay learned that you could become a member of the Farm, which we did.  Starting in early December, our membership entitles us to go to the Farm once a week and choose fresh produce that they picked for their members that morning.  We are entitled to 200 "servings" over the course of the season.  A serving might be anything from two avocados to a bunch of French breakfast radishes to a head of kale.  I've been the last two weeks and it is a lot of fun.  There are bins labeled with the names of the vegetables, some of which I've never heard of before and many of which I've never cooked with.  I'm sure that I'm much less adventuresome than Jay would be in his selections but in the last two weeks we've made a couple of new dishes with our produce.  The first week I got some bok choy and we made a delicious stir fry with shrimp.  I also picked up some kale and made a kale, white bean and sausage soup that's one of our favorites (and was first introduced into our repertoire on one of our New Year's Eve culinary adventures with Jacques and Jill.)  This week I was excited to find okra and Jay made a great gumbo with shrimp and andouille sausage.  I also picked up a papaya and some star fruit, which is surprisingly good with our morning yogurt.  And I was thrilled to find that sunflowers were among this week's selection.  Being the Kansas girl that I am, sunflowers are one of my favorites (sunflowers are the state flower of Kansas, in case you didn't know!) 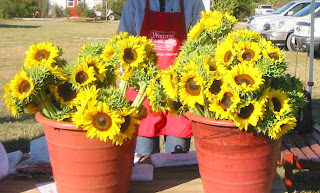 On some weeks, the Farm has "you pick" extras that you can go into the field and collect that don't count towards your allocation.  I haven't tried this yet but am looking forward to checking it out.  The property has a barn with a kitchen where you can "chat and chop" after you've picked up your veggies (more about this in my next post about the class we took there).    They always have a couple of soups going in the barn as well that you can sample (and buy, but that seems kind of crazy with all the veggies you are already bringing home!) and sometimes there are other products for sale as well.  Last week there was goat cheese by the ounce as well as home made soaps.

I am excited about having our own local farm here in Punta Gorda to help us expand our culinary horizons.  Maybe those old Kansas roots are pushing through my psyche after all these years.  As the saying goes, "There's no place like home!"