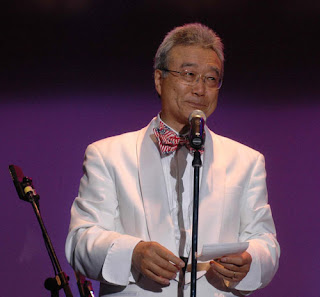 'Twas the week before Christmas and the Isles Yacht Club held its monthly lecture series (quite bravely, I think, given how busy the holidays are).  This month's speaker was T. Francis Wada, the conductor of our local symphony, the Charlotte Symphony Orchestra.  I am a convert to the CSO after the performance of Carmina Burana that I attended in November and was curious to hear what he had to say.

Francis (as he likes to be called) started his presentation by talking a bit about the physical act of conducting.  He talked about how personal batons are to conductors, just as a set of golf clubs or a fishing rod might be to the people in the audience.   It's all about the balance of the baton and the feel of it in the conductor's hand.  Francis refers to the baton as his "instrument," and calls it an "extension of his heart and his brain."   He explained that conductors use different batons based on the music that is being performed, with heavier batons being used for more powerful music.  He shared his collection of batons with the group, showing us a baton that was made for Leonard Bernstein, which was quite different looking, with a bulbous shape at the end.   A bit surprisingly, we learned that a baton can cost up to $3000!     We also learned that the famous conductor Seiji Ozawa, who led the Boston Symphony Orchestra for many years (including some performances at Tanglewood that Jay and I were lucky enough to attend), does not conduct with a baton, using only his hands to lead his musicians.

Francis gave a brief overview of the history of conducting, which began in the 1600s.  At that time, the role of the conductor was limited to stomping a staff on the floor to keep the beat.  He shared a strange story of death by conducting with the group.  In 1687, the conductor Jean-Baptiste Lully was so focused on keeping the rhythm that when he struck his toe hard with his staff, he refused to stop.  The toe developed an abscess, which later turned gangrenous. Lully refused to have his toe amputated and the gangrene spread, killing him two months later.

With the appearance of Mozart on the music scene, the art of conducting began.  No longer did music maintain a staight rhythym; it was now lively and powerful, with different timing being used in different parts of a composition.   Francis explained that the conductor's right arm is now used for maintaining the pattern of the music (i.e., to keep time), with up and down motions used for two beats, triangular motions used for three beats and so on.  The left hand is used as the "expression hand," inviting the different instrumental sections into the music.  (As an aside, Francis seems to be the most gracious of conductors.  He talked about "welcoming" the musicians into the piece and showed us the difference in feeling created by a jab directed at the musicians in question and a soft wave of the hand.)

Francis invited questions from the audience and a couple of interesting queries were raised.  One person asked about how a conductor stays hydrated during a performance.  This is definitely an issue with hot lights and dark clothing.   (I have to admit to never having thought about the fact that intermissions are as much for the conductor as for the musicians.)  Francis told us that during the November performance of Carmina Burana, he actually lost five pounds!   Another person asked what happens if the conductor is sick the day of a performance.  Not surprisingly, the show must go on, and conductors are expected to be present unless they are on their death beds.   (The same goes for the musicians, something else that I hadn't given any thought to despite the fact that Scott is going to be a professional musician!)    If a conductor is literally unable to lead, the concert master steps into the role.  This question led to a discussion of the role of the concert master in general, which includes writing a script for the strings for each piece of music so that the bows are all moving in the same direction at the same time.  Who knew????

All in all, it was quite an enlightening and enjoyable break from the chaos of the holiday season.  I feel fortunate to live in a community that values the arts and in which people like Francis are so accessible and eager to share their stories.   It really does make me feel connected and makes me want to get involved.   I'm looking forward to attending future performances of the CSO (even though there's never enough trumpet in orchestral performances for my taste--the inevitable consequence of the trumpet being Scott's instrument).   Next up:  The Power and the Passion II, with performances of music by Mahler, Brahms and Tchaikovsky.  Watch this space for my review!
at December 26, 2010