The second stop on my visit to the John and Mabel Ringling property was Ca' d'Zan Mansion, the Venetian-style home that they commissioned to have built for them for $1.5 million.   We're talking 1926 dollars, so you can imagine that it is not exactly modest.   It has been described as the last of the Gilded Age mansions to be built in the United States and it rivals the homes in Newport that I've toured.  Only the ground floor of the 22,000 square foot four story mansion is open to the public and I think I will go back and take a tour of the whole home at some point.  (If you pay an additional $5 for a docent-led tour, you get to see the second floor.  If you spring for the "private places" tour, for an additional $20, you also get to go up in the 61' Tower and see John's exercise room--I'm thinking he didn't have an elliptical machine!--study and game room and some of the 32 bedrooms.  The Mansion had to be restored in the 1990's at a cost of $15 million and I can't begrudge them trying to recoup some of those costs.) 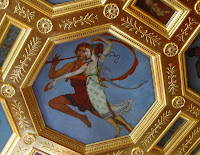 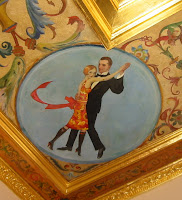 The first room that I visited was the West Ballroom and it was truly fabulous.  The room itself is on the intimate side--definitely not the size of a ballroom that you might find in other mansions of the era.  What was striking, though, were the 22 paintings on the gilded ceiling.  Hungarian artist Willy Pogany, best known for his Art Nouveau illustrations of classic myths and legends, was apparently given free rein to do what he wanted and he chose to depict dancing couples from different nations. The photos I took do not begin to do them justice.  Each painting was unique and the subjects ranged from mythological figures (above) to Japanese geisha girls to African Americans who appear to be at a speak easy to the couple on the right who seem to be early incarnations of Fred and Ginger.  Pogany apparently did some paintings on the third floor of the Mansion as well that included portraits of the Ringlings dressed in Venetian Carnival attire and some of their pets--maybe I'll have to do the private places tour at some point to seem them! 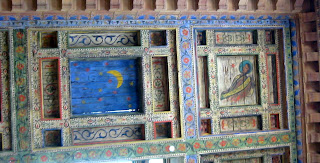 The next room I visited was what was referred to as the "Court" and, once again, the ceilings were the main attraction for me.  This is the room where John and Mabel entertained such luminaries such as Will Rogers and Flo Ziegeld.   The furnishings in the room were "typical" heavy Italian, with abundant amounts of gold leaf.  The ceilings were plaster painted to look like wood, however, and the semi-folk art feeling paintings seemed somewhat out of place in all that opulence. The paintings in this room were apparently done from unset cameos that Mabel Ringling owned, which is pretty astonishing in and of itself.

Nothing in the rest of the interior of the first floor of the mansion warrants mention here but my socks were knocked off when I walked outside onto the terrace.  The mansion has 1,000 feet of waterfront property on Sarasota Bay (Jay would definitely be drooling) and it is truly stunning.  John Ringling docked his yacht there and Mabel, in the Venetian spirit of the home, had her own gondola that was housed at a small island just off the terrace that no longer exists.  The view from the terrace today includes parts of downtown Sarasota.  I can only imagine how fabulous it was when no other buildings dotted the horizon.   Sadly, Mabel Ringling died in 1929, so she only got to enjoy her home in Sarasota for a few years.  John Ringling died in 1936 and he willed the entire estate to the State of Florida.  It is truly a Florida treasure.
at November 03, 2010